(Clearwisdom.net) On August 10, Falun Gong practitioners from Queensland, Australia, participated in the Multi-Cultural Festival in Toowoomba. 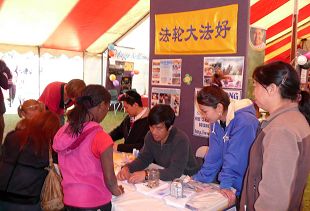 Toowoomba, known as the "garden city", hosts the Multi-Cultural Festival every year. Falun Gong practitioners set up a booth at the festival. Many people stopped by and accepted the truth-clarifying materials. Some of them were interested in learning the exercises.

Practitioners also performed at the festival. The organizers thanked practitioners for their excellent dances and singing.

Several people approached the practitioners afterwards, telling them that they understood the meaning of the song, Dedu, and were touched by it.

“Finland: Candlelight Vigil Held to Commemorate Fellow Practitioners Who Were Tortured to Death in China (Photos)”