Finland: Candlelight Vigil Held to Commemorate Fellow Practitioners Who Were Tortured to Death in China (Photos)

(Clearwisdom.net) On the evening of August 8, 2008, Helsinki Falun Gong practitioners held a candlelight vigil on the roadside along the Boulevard ed la Croisette in the central area of the city to commemorate the Chinese practitioners who were persecuted to death by the Chinese Communist regime in mainland China. They also condemned the Chinese regime's escalation of the persecution against Falun Gong under the excuse of hosting the Beijing Olympics and called on the people around the world to denounce the Chinese Communist Party (CCP) so as to put an end to the persecution.

Finnish Falun Gong practitioners hold activities in Helsinki to raise the awareness of the persecution of Falun Gong in China. 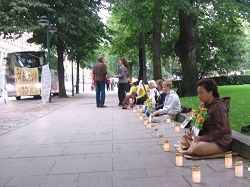 A candlelight vigil is held along the roadside. 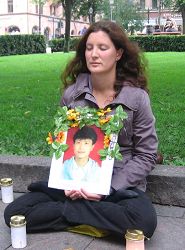 A practitioner silently commemorates one of her fellow practitioners who was persecuted to death.

The opening ceremony of the Olympics was held on the same day. According to the data released by the Falun Dafa Information Center in July, the Chinese regime has stepped up efforts to arrest Falun Gong practitioners under the pretext of hosting the Olympics. Since December 2007, at least 8,037 Faun Gong practitioners were illegally arrested in China's 29 provinces, special municipalities or autonomous districts. Among others, over 500 of them were arrested in Beijing, and over 300 of them were sent to force labor camps for two and a half years of incarceration without trial.

The banner reading "Falun Dafa Is Good", photos of the practitioners who were persecuted to death and the glowing candlelight attracted a lot of attention from passersby. Some accepted flyers and stopped to read them attentively, others took pictures of the scene and still others even crossed the street to sign the petition to support Falun Gong.

Though there are not so many Chinese Falun Gong practitioners in Finland, three of them were once illegally imprisoned in China. Among others, Lu Shiping was illegally arrested four times, and was once incarcerated in the notorious Wanjia Forced Labor Camp in Harbin for 20 months. A Chinese student by the name of Qi Lihe, who returned to China in early 2002, was secretly kidnapped by plain clothes police in his residence in Shenzhen in September 2006. He was secretly sentenced to three years in jail in June 2007, and he is currently confined at the Beijiang Prison in Shaoguan City, Guangdong Province. In addition, four other practitioners' family members or relatives had been imprisoned or are incarcerated illegally at present. Among them, Zhang Weijie, the father of Chinese student Xu Mosangzi, who came to Finland in 2007, was kidnapped on his way home after work by the police from the Wuhan Security Bureau's First Division on March 20, 2007. He had been confined in the Hewan Forced Labor Camp on February 11, 2008, by the special agents from the Wuhan Security Bureau's First Division, and is now imprisoned in the Wuhan Municipal First Detention Center. Jin Zhaoyu is a Falun Gong practitioner who just arrived in Finland from Zhengzhou City, Henan Province, China on July 10 to visit her relatives. Her mother Chen Zhenping was illegally arrested after the police from the Dongwuyuan Police Station on Garden Road, Zhengzhou City, searched her home on the evening of July 9. Her younger sister has been destitute and homeless since then.

Ms. Jiang also said that while commemorating the Falun Gong practitioners who were persecuted to death, they were also exposing the CCP's atrocities on the eve of its collapse. In particular, the large scale arrests of Falun Gong practitioners in the run up to the Olympic Games further indicated the CCP's fears losing power and the fact that over 40 million Chinese people have denounced the CCP and its affiliated organizations. This mania is simply the momentary struggle before its collapse. Eventually the world's people will understand the truth that the best approach to put an end to the persecution is to rid the world of the CCP.

“Press Conference in Warsaw, Poland: "This Persecution Is a Disgrace to Humanity"”