(Clearwisdom.net) On June 28, Falun Gong practitioners from St. Louis, Missouri, attended the annual Ballwin Day Parade for the third year in a row. 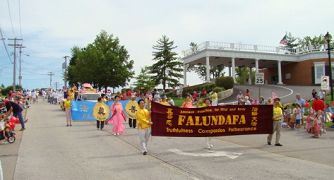 Ballwin is a suburb close to St. Louis with a population of thirty thousand people. The Ballwin Day Parade is held in June every year. Many politicians and community groups attend the festivities.

Practitioners displayed banners and a float, and demonstrated the exercises. Many spectators accepted truth-clarifying materials from practitioners. Some of them expressed their concern about the human rights situation in China. One gentleman from the entourage of a candidate for state representative came over and asked practitioners for detailed information about the persecution in China. He was shocked and expressed his concern when he learned about the recent assaults against Falun Gong practitioners by Chinese Communist Party agents in Flushing, New York.

A practitioner said that they often attend community events like this to spread the beauty of Falun Gong to people and clarify the truth about the persecution. He said that Falun Gong practitioners are always made to feel very welcome by the local citizens and the event organizers.

“Ms. Wang Shuxia Tortured to Death While in Custody in Liaoning Province”