On Saturday, July 19, UK Falun Dafa practitioners held a protest and candlelight vigil opposite the Chinese Embassy in London. The protest was to mark the nine years of persecution against Falun Gong and to commemorate the thousands of practitioners who have lost their lives at the hands of the Chinese Communist regime. 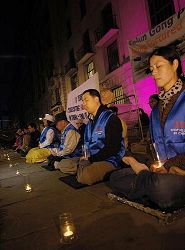 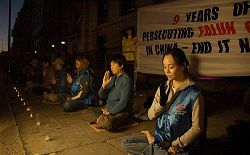 On July 20, 1999, the Chinese Communist Party (CCP) launched the persecution against Falun Gong. Over the last nine years, 3,168 Falun Gong practitioners have lost their lives, many tortured to death; 75 of them were in their eighties, and the youngest was only 8 months old. Thousands of practitioners are currently jailed and being tortured in forced labor camps, detention centers and prisons. The CCP even harvests organs from living Falun Gong practitioners for profit.

The protest began in the evening with a group meditation practice and continued as dusk turned into nightfall. Many passersby picked up leaflets to find out more about Falun Gong and the human rights abuses against practitioners. A lot of passersby were already aware as UK practitioners have been protesting opposite the embassy 24 hours a day for over 6 years. This has had a powerful effect in highlighting the human rights abuses against Falun Gong in China. Many drivers have honked their horns or shouted out words of support as they passed by the continuous appeal by UK Falun Gong practitioners.

“Compassion Magazine: What a Difference a Strait Makes”