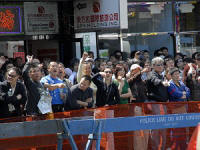 The Epoch Times has uncovered a new strategy the Chinese Communist regime is using to demonize the Falun Gong spiritual group and incite Chinese nationals to violently attack adherents. And it is being played out in Flushing, New York City.

Chinese Communist Party (CCP) agents, masking themselves as Falun Gong believers, have recently engaged in ploys to stir up hatred against the group, say witnesses and participants in training sessions organized by the Chinese agents.

The ploy includes covering the staged events in pro-Communist media to drum up resentment toward the group worldwide.

In mainland China, state-controlled media have been churning out reports accusing overseas Falun Gong adherents of blocking efforts to collect donations for the victims of the Sichuan earthquake--a claim for which they've so far presented no proof, and which appears to conflict with first-hand accounts of events in Flushing.

Yet those reports have helped give grounds for mobs of furious Chinese--numbering as high as 1,000--which have swarmed Falun Gong practitioners in New York City who were raising awareness about the Chinese regime's human rights abuses.

A spokesperson from Falun Gong practitioners in Canada warns the ploys are part of an intensive effort to demonize Falun Gong around the world, and to reduce pressure on the regime to improve human rights ahead of the Beijing Olympics in August.

At a May 31 rally in support of the millions of Chinese who have renounced the Communist party held in Flushing, New York City, observers said non-practitioners wearing Falun Gong yellow T-shirts were on-site calling out slogans like, "The Sichuan earthquake is retribution to Chinese people," and "Chinese people died in the earthquake because of karma." 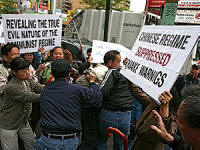 Caption: Organized attacks on the "Quit CCP" service center in Flushing have gone on since May 17. (Li Ping/The Epoch Times)

Such messages have led some Chinese to channel their despair over the recent earthquake into anger toward Falun Gong, says Lucy Zhou, spokesperson for the Falun Dafa Association of Canada, who recently returned from Flushing.

"This is a strategy the CCP always uses," said Zhou. "Whenever the government comes under attack for making some mistakes, like the way they mishandled the Sichuan earthquake, they try to find some scapegoat and divert attention away from themselves and target a specific group."

Following the quake, Chinese Internet chat rooms and discussion forums were ablaze after it was revealed the regime had suppressed information from seismologists, who had warned there would be a temblor. 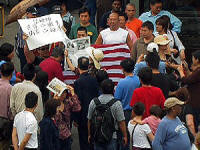 The regime has also been criticized because many of the children who died in the quake appear to have been indirect victims of government corruption, as their schools were not built to proper standards and were immediately leveled by the earthquake.

Chinese authorities have moved to quell such reports in Chinese media.

And making a scapegoat of Falun Gong, a benign spiritual group the regime has persecuted relentlessly since 1999, appears to be part of their tactics.

One man from Shanghai admitted attending training sessions set up by the Chinese agents to groom the Chinese nationals in how to defame Falun Gong. Out of fear of retaliation, he has asked that his name not be used.

"Pretending to be a sympathizer is very effective, so high level leaders request that we all use this method to spread rumors about Falun Gong among Chinese student associations, online chat rooms, various overseas Chinese associations, and in mainland Chinese society," said the source.

"Actually it's very easy to identify these impostors, because this group of people doesn't understand Falun Gong at all. They all speak according to the spy training they received, so the words they use are basically the same."

Some apparent spies claiming to be Falun Gong practitioners send e-mails to spread false statements made by The Epoch Times newspaper, which has covered the events in Flushing since last month. They play on the patriotism of the Chinese to spread rumors about the Olympics, the recent earthquake, and Tibetan issues, said the source.

There have also been messages sent under Falun Gong practitioners' names on the Internet, or under the names of "former sympathizers" of Falun Gong, in an apparent effort to have Chinese turn against the group in larger numbers.

A common message is "[We] sympathized with Falun Gong in the past, but due to their recent behavior we no longer support them."

"I think that the Chinese Communist Party has taken the chance to politicize the earthquake in China and turned the internal crises toward Falun Gong practitioners, and they fabricated lies and organized spies from the Chinese Consulate to rally nationalistic Chinese and carry out propaganda campaigns in Flushing to go against Falun Gong." --Canadian Falun Gong practitioner Lucy Zhou, who recently returned from Flushing.

This latest tactic in the CCP's nine-year campaign to eradicate Falun Gong began in May when Chinese state-controlled media first broadcasted reports claiming that Falun Gong practitioners interfered with Sichuan donation activities in NYC's Flushing-area Chinatown and that they were unsympathetic to quake victims.

Contrary to those reports a May 17 rally in Flushing, where protesters first assaulted Falun Gong practitioners, included three minutes of silence for the earthquake victims.

During that period of silence, David Gao, who heads up the Quit the Chinese Communist Party Center in Flushing, said it was actually the pro-Communist mob was yelling, "Long live the CCP" during the silence for the quake victims.

Those individuals ignored the host who, with tears in her eyes, asked for silence, said Gao.

Falun Gong practitioners in Flushing had a booth set up to help Chinese people withdraw from the CCP and its affiliated organizations. For weeks following the rally, the booth has been surrounded by a mob of furious Chinese people.

Among the first people arrested were Guang Chen and Fu Ni, two Chinese men who assaulted a Falun Gong adherent, who tried to take their picture while they were in the midst of forcibly interfering with efforts to expose the CCP's human rights abuses.

Lucy Zhou was also among those assaulted.

Zhou said she was recently in New York and participated in a Falun Dafa parade. She wore a yellow vest with Falun Dafa written on it and walked on the sidewalk talking with people about human rights abuses in China.

At one point, Zhou said she encountered a group of people who would only shout at her and would not listen to anything she said. She suspected they were among the people the CCP has paid to disrupt Falun Gong activities, so she silently walked away from them while they jeered at her and tried to start an argument.

Rather than let her leave, Zhou said they followed her and soon surrounded her, along with others who recognized her as a Falun Gong practitioner because of her yellow vest.

"It was quite intimidating," said Zhou.

"I was the only one in the center of the road, with a mob of hundreds of people on both sides, yelling loudly at me. I decided to keep my head high and walk with pride, and keep smiling. Then I heard the sound of the mob starting to throw stuff at me. The stuff was hitting the street. At this point, the police escorted me, along with two other practitioners, into a police van away from the mob."

The Epoch Times has received evidence that overseas Chinese missions are directly participating in the defamation efforts.

In an audio recording obtained by The Epoch Times May 23, the New York Chinese Consul General, Mr. Peng Keyu, is heard admitting that he "secretly encouraged" the mob's participants.

Peng said he thanked the mob members personally and "ran other things on the scene," in the recording, made by an investigator posing as an ally of the consul.

Several sources have reported to The Epoch Times that mob members are getting paid by Peng from $50 to $100 a day to participate in the disruptive activities.

The effects of the Chinese regime's efforts are now being felt by Falun Gong adherents. Several report that in Flushing wearing a yellow T-shirt can now lead to a beating. So can holding up a sign encouraging Chinese to withdraw from the CCP. Several report being cursed or spat upon.

Steve Lancione, a Falun Gong practitioner from Boston, recently hosted a "Quit the CCP" rally in Flushing, in support of more than 37 million people who have publicly resigned from the CCP and its affiliated organizations. After the rally, he was surrounded by an angry mob of 50 CCP supporters who attacked him. 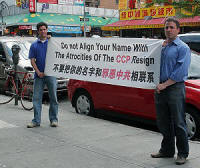 Caption: Steve Lancione (R), a Falun gong practitioner from Boston, Mass. hosted a "Quit the CCP" rally in Flushing, Queens on Saturday. After the rally, he was surrounded by an angry mob of 50 CCP supporters who attacked him. Two arrests were made. (Tim McDevitt/The Epoch Times)

About 1,000 people attended to support those who have quit the CCP. After the rally Lancione said he was standing near an Epoch Times newspaper box when he saw an older gentleman and a younger girl stealing the newspapers and tearing them up.

After Lancione confronted them on their actions the man began screaming that Lancione had hit his daughter.

Lancione was surrounded by close to 50 Chinese who screamed at him. One woman struck a police officer after the mob was ordered to calm down, and two were arrested.

Since the anti-Falun Gong efforts began in Flushing Chinatown, several Falun Gong believers there have been refused service at Chinese restaurants because of their faith. The Epoch Times was on hand to take a photo as one adherent was ejected from the Lucky Joy Restaurant.

A young group of students who claimed to be raising money for Sichuan earthquake relief with a box for monetary donations interspersed calls to "give a little donation" and "pray for Sichuan," with curses against the spiritual practice Falun Gong.

When questioned by Epoch Times reporters why they were chanting slogans against Falun Gong during earthquake relief efforts, the students denied what they had said.

Caption: The Chinese mob threatened an Epoch Times photographer, "We will kill you!" (Sonya Bryskine/Epoch Times)

"No, no, we are only talking about Sichuan," claimed one student who would not identify herself.

Meanwhile, The Epoch Times has also become a target of attacks, apparently for its detailed coverage of the events unfolding in Flushing and the Chinese regime's shortcomings in dealing with the quake.

The Epoch Times was the first newspaper to report evidence the regime had suppressed predictions of the quake, though other press, such as the London-based Times and the New York Times have now also published reports.

On May 30 at about 5:00 p.m., the Chicago branch office of The Epoch Times received a threatening letter with a clipping from the most recent issue of the Chinese-language Epoch Times Mid-U.S. edition and an unidentified white powder.

Caption: The letter contained a clipping from the Epoch Times newspaper and a note that said "Long Live the Communist Party". (The Epoch Times)

Staff called emergency services and on arrival, the police separated the staff who had touched the letter and held them in a makeshift quarantine. A tech team carefully removed the letter from the office and took it away for analysis. One hour later a call came that the contents of the letter were safe.

The letter has two lines, one praising the CCP and the other using vulgar language to attack Falun Gong.

"The Chinese Communist Party fears the truth, and we are telling the truth. They don't want people to know the truth," said Helen Ye, the chief editor of the Mid-U.S. edition of The Epoch Times, when asked why the letter had been sent to her office.

“Belgium: People Around the World are Watching the CCP-Inspired Violence in Flushing, New York (Photos)”