Canada: Parade Held in Montreal to Support the 39 Million Withdrawals from the Chinese Communist Party (Photos)

On June 21, the Service Center for Quitting the Party in Montreal held a parade in Chinatown to support the 39 million withdrawals from the Chinese Communist Party (CCP). The parade drew a lot of attention. 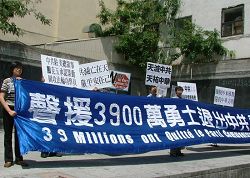 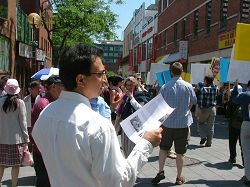 Many receive information during the parade 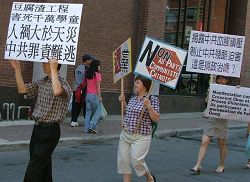 The parade lasted one and half hours and went through Chinatown several times. The attendees held many banners in Chinese, English and French to expose the evil nature of the CCP. Volunteers passed out copies of newspaper the Epoch Times. People were concerned about the assaults against Falun Gong practitioners in Flushing, New York.

A local citizen said: "The parade and the message is very good. Chinese people don't have freedom of speech in China, so we, people in Canada, should speak for them, and let more people know what is happening in China."

Several Chinese tourists were happy to learn about the wave of quitting the Party. They said that they will spread this information to their friends and family in China.

Ms. Lin, a volunteer for the service center, said: "More and more people recognize the evil nature of the CCP. I got a phone call two days ago. The guy told me that he helped the CCP to attack Falun Gong before. But on the phone, he apologized to me, because he realized how evil the CCP is. He also asked me to help him quit the Party."

“Australian Senate Passes a Motion, Calling for an End to the CCP's Persecution of Falun Gong”