Owner of Mahlers Dancehall: The best presentation of national image

Marsha Shepley, owner of Mahlers Dancehall, with one hundred year history, said after watching Chinese Spectacular, "I loved it." She thought that DPA did a wonderful job. 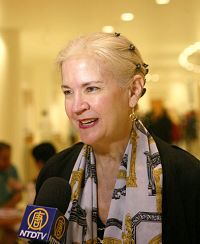 Ms. Shepley commended the performance and said she liked each aspect of it, including the choreography, costumes, music, backdrops, and coordination of the story and dancing.

Director of a Dance Company: An art enjoyment hard to get

Stacy West, director of the Modern American Dance Company, studies Chinese and Korean dancing. Before each performance, she read the program brochure carefully. 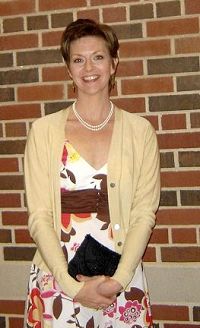 Ms. West has many years of experience in modern dance performance. She said after watching the show, "These performers seem very skillful and have many years of training, which is perfectly combined with stage experience."

She commended the performance, "The performers are beautiful. The costumes are really beautiful. Colors and music are put together, an art enjoyment hard to get. I most liked the drum dancing and fan dancing." Ms. West said she learned a lot from the DPA performance.

“France: Practitioners Commemorate "April 25" in Paris--Call for the CCP to Stop the Persecution”