(Clearwisdom.net) In order to celebrate the sixteenth anniversary of Falun Dafa's public introduction and the ninth World Falun Dafa Day, on May 10, 2008, Falun Gong practitioners from Bavaria, Germany held a celebration in front of St. Michael's Church in downtown Munich. 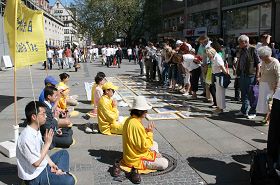 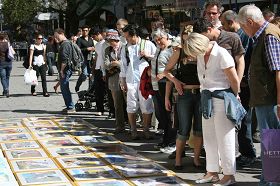 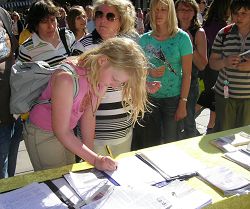 In front of St. Michael's Church, along one side of the practitioners' display, there were banners to celebrate World Falun Dafa Day, a Truthfulness-Benevolence-Forbearance photo exhibition, and practitioners demonstrating the graceful exercises. Along the other side there was a picture exhibition exposing the Chinese Communist Party's (CCP) persecution of Falun Gong. Many people stopped to find out more about Falun Gong and how they could help stop the persecution.

Practitioner Mr. Guo, who arrived in Germany at the beginning of this year, talked about the activity, "I have experienced a gamut of emotions as I participate in this activity. Falun Dafa has been widely spread for 16 years, but starting in 1999, many practitioners in China have suffered from the CCP's persecution. I have seen and experienced this firsthand. So today I am very excited, as I can celebrate Falun Dafa Day in public." He told reporters that six years ago, he first found out about Falun Dafa Day as he was being imprisoned in a Chinese forced labor camp for his belief in Falun Gong's principles of Truthfulness-Compassion-Forbearance. He found out about it from a flyer that practitioners had dropped into the labor camp's courtyard. When he decided to go on a hunger strike in protest of the persecution, he was tied up for the entire day. Mr. Guo's efforts resulted in his release 24 days later.