May 13, 2008, marked the ninth World Falun Dafa Day and the 16th anniversary of the worldwide dissemination of Falun Dafa. Northern Taiwanese practitioners went to Xinyi Square in downtown Taipei on May 11 to celebrate and praise Dafa's grand benevolence and express their congratulations on the occasion of Master's birthday. 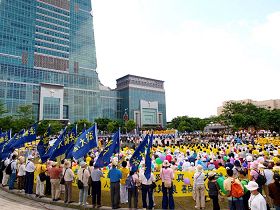 Practitioners from the greater Taipei area went to Xinyi Square to celebrate World Falun Dafa Day with an assembly and parade on May 11, 2008 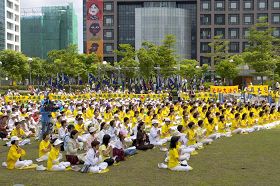 Another view of practitioners at Xinyi Square, Taipei 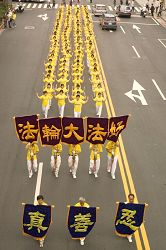 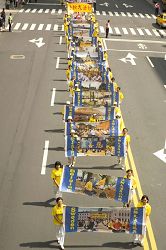 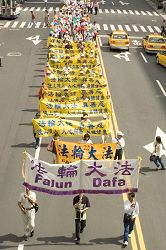 The celebratory parade at Zhongyi

Falun Gong practitioners are from different nationalities and places, different backgrounds, and different races. Approximately 100 million people worldwide have embraced the practice during the past 16 years. Many practitioners said that, once they began the practice, they have lived according to the principles of "Truthfulness-Compassion-Forbearance," thinking of others first and experiencing great positive physical and mental changes in their family life and at work.

We interviewed several practitioners who stated that they became healthy after beginning the practice and no longer needed a health insurance card, saving medical fees. Changing their once-held notions for the better, they no longer fear cold, not even in the winter when they wear less clothing and use only a thin blanket at night. Several seriously ill patients recovered after a period of practicing Falun Gong, surprising everyone to see that the practice greatly affects physical well-being and maintaining a healthy body. The practice also enables people to change their temper and character for the better. Practitioners overlook things and always think about others, thus leading to better relationships with others. Their work and home lives improve, and their lives are happier.

Real estate agent Liu Xuxu has an elegant appearance and speaks very calmly. She said with a smile that she used to be hot-tempered. If she encountered anything unfair, she spoke out and demanded fairness, but she has changed greatly since beginning cultivation. Whenever she encounters anything now, she immediately thinks about whether it will harm others; whether there is an attachment to money, benefits or reputation involved; and how it should be dealt with in accord with the standards of a cultivator. "I treat everything calmly, something I could never do before my cultivation." She had previously struggled over who was right and who was wrong and would berate others and not give way. Ms. Liu said, "Master points out clearly that a cultivator must search inside whenever encountering anything. Now I seldom get angry and get along with others more harmoniously."

She continued, "I used to live a hollow life, and nothing satisfied me. I had previously thought I must pursue reputation, benefits, and emotion, but I found in the end it was nothing. Since I read Zhuan Falun I found what I wanted. The book firmly grounded me and I live a better, purer life. I am on my way to return to my origin."

Wei Qingrong has practiced Falun Gong for almost ten years and appears happy and refreshed. You could never imagine that she used to be a late-stage cancer patient. It took doctors at Taiwan University Hospital six months of exams and attempted diagnoses to find the cause of her illness. She was too ill to stand up. She said she initially practiced Falun Gong to cure her illness. The initial sitting meditation exercise made her hurt, but she progressed from doing the meditation for 45 minutes to one hour. It was so painful that she could not find words to describe it. After practicing for some time, she became hopeful and felt physically and mentally healthy. No one could any longer tell she used to be a seriously ill cancer patient. Her children saw she had changed so much for the better and gradually identified with Falun Gong.

She used to be afraid that her children would suffer losses outside or at school, and asked them to protect themselves, telling them to fight for their rights. She has since realized that everything progresses naturally, and she used this understanding to educate her children. At first her children were not used to that way of looking at things and didn't understand, but they gradually accepted her positive influence. Her daughter wanted to learn dancing and always wanted to have a chance to perform on stage. Now she no longer demands this. The end result was rather better.

Giving up Smoking and Alcohol after Two Weeks' cultivation

Since quitting smoking he changed himself completely and became more and more healthy. He is in high spirits and conducts himself according to the principles of "Truthfulness-Compassion-Forbearance." He interacts with his family and colleagues more harmoniously. When his colleagues saw that he was able to break this bad habit in such a short time, they were surprised and became interested in and admired Falun Gong very much.

Mr. Zhen, a successful orchid nursery owner with many clients, appears very healthy. He said that, since he became a cultivator, he thinks about business matters quite differently. Prices in the orchid business are not set. The rarer the orchid, the higher the price. Someone might speculate on it to earn higher profits. But he said, "When I bargain with a client for a price, I determine whether the plant is up to grade and what price it merits. I stick to the honesty principle and operate an ethical business."

He explained that he first communicates with his clients. Some people borrow money to buy orchids and want to make a fortune. He first considers whether it will influence the clients' future life, and whether he can make a profit. He treats every client honestly, and almost every client becomes his good friend. He's never made business cards and does not advertise. His business simply relies on the old-fashioned way of advertising--by word of mouth! His business is doing very well. Many of his clients eventually learn that he practices Falun Gong.

Mr. Zhen also told about an accident that had happened to him. After attending a group Fa study, another practitioner and he were walking on the most inside pedestrian lane when two young men on a motorcycle suddenly ran into him and knocked him down. He got up slowly and also helped up the two young men up. He asked them whether they were OK. The two young men were very sorry for what they had done and realized that they had met a really good person. He said that all was well, telling them they could leave, and assuring them he would not try to make money from the accident. When he thought about it later on, he realized that he had acted like he did because he practices Falun Gong.

College teacher Mr. Chen said that young people in modern society have many deviated concepts, do strange things, and often pursue material benefits. He used to look on them with contempt. After becoming a cultivator, he acted like a practitioner and let go of selfishness. He treated the college students as his would his own family--caring for them, instructing them, and helping them them when they were in difficulties. Afer he changed his mind, he felt wonderful.

Being Selfless and Calm

Ms. Wang Sanling works for the Agriculture Committee of the Executive Yuan. She related that, prior cultivation, she was always ill, though not seriously, catching a cold during the winter or a sore throat, usually lasting several months. She also had relatively high blood pressure. Since cultivating, these symptoms have disappeared. She had to control her menopause discomfort with medicine before. Two weeks after beginning to cultivate, the symptoms improved greatly, and she no longer took medicine. She continued, "My mother witnessed my physical changes. At each year's physical check, the doctors said that I was very healthy."

She also said, "I used to be hot-tempered. When somebody first goes to works in a new company, the employees like to tease the newcomer. If they teased me, I would lose my temper. But now I don't get upset and deal with it calmly. When we did the exercises at our exercise site, other people were doing their morning exercises. They wanted to have more space and intentionally played very loud music. We were uncomfortable and initially wanted to argue with them. Gradually we calmed down and communicated with them kindly. We have dealt with each other peacefully for several years. "

Mr. Cai is a radio technician. He got in touch with Falun Gong, thinking it was a group that meets to purify the heart. He had taken photos of Falun Gong activities since 2005. Mr. Cai saw the documentary "False Fire" and learned that Jiang Zeming's regime told great lies about Falun Gong. The Tiananmen Square Self-immolation Incident, he learned, was actually fictitious. Practitioners sent him a copy of Zhuan Falun. He promised he would read the book carefully.

“Three Practitioners Died as a Result of Persecution in Liaoning, Sichuan, and Yunnan Provinces”