Health consultant Catherine Moore took her family to see the second showing of the Divine Performing Arts Chinese Spectacular at the Northern Alberta Jubilee Auditorium on May 6, 2008. More than just pretty costumes and dances, Ms. Moore felt that the show conveyed tranquility and bliss. 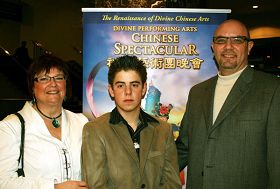 Catherine Moore and her family

Moore said the colors in the Spectacular were bright yet soft, the dances were graceful and gentle, and oriental music was calming, endearing and natural. Many scenes were serene and gave her the feeling one would get during meditation, which lifted her mind from daily struggles and almost made her want to dance. She said, "The Spectacular's music, dance and visual presentation embody harmony and peace. The philosophy of the Spectacular is peaceful and well balanced. It emphasizes the pure essence of human beings and guides people to live a positive life."

As a health consultant, Moore believes in the ancient Chinese philosophy of "oneness between heaven and man." She said the beauty and harmony of the Spectacular and its messages serve as a spiritual cleansing, and it would be very beneficial to exercise the mentality of peacefulness in one's daily life. Her suggestion? "If possible, spend a little time doing meditation after work; you'll feel wonderful."

She also praised the perfect combination of the three-dimensional digital backdrop and dance. She commented, "The background was first class! It takes you away to a remote land, and it's a full immersion experience of the best kind...The opening score, 'Descent of Celestial Kings'--although I've never been to heaven, it really felt as if the king of the universe had come into this world. I think anyone who believes in the divine would be glad to follow this heavenly king."

Moore was most impressed with the costumes and the dance rhythms. "For example, the rhythm and color matching in the dance, 'Snowy Mountain White Lotus' was beyond excellence; the ocean waves were really realistic in 'Nymphs of the Sea,' they were so lovely, I don't know how to describe them."

One year ago, Moore and her son traveled to China and for the first time they learned about China's 5,000-year history and numerous dynasties. Ms. Moore thought the Spectacular opened a window to an authentic Chinese experience. "Canada has its own history, and I didn't feel connected to China before. I really must thank the Spectacular for introducing China's five millenniums of culture to Canada and sharing your precious traditions with us."

“The Joy of Returning”