(Clearwisdom.net) As the final drum beat of "Victory Drums" resounded throughout the Jubilee Auditorium in Edmonton, Alberta, Canada, at about 10 p.m. on May 7, 2008, applause and cheers filled the auditorium and the audience gave a standing ovation. It marked the end of a successful world tour of the Chinese Spectacular by Divine Performing Arts in 2008.

Pamela MacKenzie, a teacher, watched the show with her brother, Sanfred. "From the first program to the end, the show was breathtaking. I cried and waited for the next performance. I am not a person who easily cries, but I could not help my tears. This is a special show," she said.

Pamela continued, "I was touched when I saw those two teenagers sit down and read the Buddhist scriptures [in "The Fruits of Goodness"]. I felt happy that they were saved and started their journey back to their true selves. The show was touching and entertaining. I want to have a DVD of it so that I can watch it again and again."

Sanfred said, "This show purifies one's heart and will purify society. I heard that one lady watched it eleven times. I can understand. There is Buddha Law in this show. It has opened my eyes. I have never seen such a good show before in my life."

Sanfred's favorites were the dances, "The Risen Lotus Flower" and "The Fruits of Goodness." "I want to obtain the Buddhist scriptures too," he said, "[The teenagers] learned the purpose of life, so their lives were different from then on." 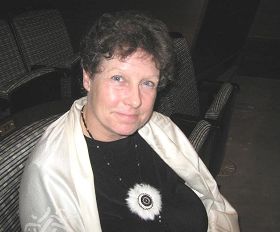 Sandy Helland: "The show gave me new hope for life."

Sandy Helland watched the show three times. She said she could not describe her feelings with language. "The show healed the disease in my spine. It not only healed my disease, but also opened my heart. It gave me new hope for life," she said.

Sandy's spine was injured when she was four, which rendered her disabled for her whole life. Her acupuncturist recommended the show to her. She watched the first show in Edmonton on May 5. "I felt energy flowing in my back. It felt warm and stronger and stronger. I was completely healed by the time the show ended," she said. She was so excited and happy that she watched the show again on May 6 and 7. "My heart is full of joy and energy," she said. 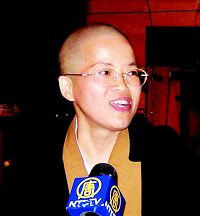 Fajun, a Buddhist nun, followed the show from Vancouver to Calgary and Edmonton. She watched it 11 times. "The best of the best in history. Very peaceful and very precious," she said of the show.

"Divine Performing Arts displays the divine realm and culture. Only because the performers' spirits reach to such a height, can they manifest the level of Buddha so well through the dances," said Fajun. "The show provided people with pure truthfulness, compassion and beauty."

Wang Kailun is a government official. His grandparents are from China. Influenced by them, Mr. Wang likes Chinese culture. "I liked the erhu solo the best. I wish my grandparents were here to share it with me," he said. "I am proud of my own culture."

Mr. Wang said the show brought real Chinese culture to the West, instead of the culture of communism. Mr. Wang agreed with the principles of "Truthfulness-Compassion-Forbearance," that were displayed in the show.

James Mazurok, a sophomore in college, fell in love with the erhu (a two-stringed instrument). He also liked the "Water Sleeves" dance. He said, "I believe in reincarnation, so I was deeply touched by the first program, 'Descent of the Celestial Kings.'"

Ms. Tia Zhang, co-director of Divine Performing Arts, has been traveling with the arts troupe around the world for six months. She was deeply touched by how well the audience understood and appreciated the shows. "Many people traveled long distances to the show, and many of them watched it again and again. I am very touched to see that the audience loves the show and has benefited from it. Our efforts have been worth it," said Ms. Zhang.

Divine Performing Arts held the first show of the season on December 18, 2007 and the final one on May 7, 2008. The two troupes toured in 66 major cities in North America, Europe, Australia and Asia and held 215 shows in total. Approximately 600,000 people enjoyed it.