(Clearwisdom.net) On the afternoon of April 25, 2008, practitioners went to the Chinese Embassy to commemorate the ninth anniversary of the peaceful appeal of ten thousands Falun Gong practitioners on April 25, 1999. 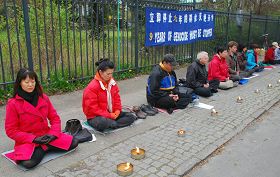 Baol Anderson is about eighty years old. He has practiced Falun Gong since April 1999. Baol has been coming to the Chinese Embassy to protest every day for six years, regardless of summer heat, winter cold, winds or rain. He said, "As long as CCP does not stop the persecution of Falun Gong, I will continue to be at the Chinese Embassy peacefully protesting."

Mr Song is from Dalian City in China. He recalled the unforgettable day of the great appeal nine years ago. He said, overhearing that practitioners were detained in Tianjin, a lot of practitioners in Dalian City right away bought flight tickets to Beijing. "I happened to have no ID card with me and could not get the flight ticket. So I went by train. It was the 26th, the when I arrived in Beijing. At that time, the practitioners who appealed at the State Council's Appeals Office in Fuyou Street had already scattered. Looking at Beijing, there were loads of police. We could feel the tense atmosphere before the storm of the persecution really started. There were lots of discussions of different opinions between us practitioners. Some practitioners gave up cultivation because they could not let go of human attachments, but more practitioners chose to continue practising Falun Gong at such critical moment, and steadfastly walked through. Cultivating is serious. The every past step, when I was recalling it, was testing on our righteous belief towards Falun Gong."

Ms. Bao from Shanghai recalled the April 25, 1999. "Shanghai is far from Beijing, so only a few went, as representatives." "The fellow practitioners who came back from Beijing told us that on April 25, the lofty morality of the over ten thousand practitioners near Zhongnanhai made a deep impression on the police. Our practitioners not only picked up the trash, but also picked up all the cigarette butts left on the ground by the police. In the end, the police were even ashamed casting cigarette butts on the ground. Nobody would have thought about that in just a few months Jiang would launch the persecution of Falun Gong, establishing the 610 Office which was especially in charge of persecuting Falun Gong, and claim that he could annihilate Falun Gong in just three months. Only because I didn't want to give up my belief in Truthfulness-Compassion-Forbearance, I was taken away by the police from my work place and then jailed unlawfully for three and a half years. I suffered both mentally and physically."

Ms. Wu who was already overseas at that time recalled, "I read some experience sharing articles written by fellow practitioners who participated in April 25's great appeal, vividly describing the events of that day in great detail. I still remember clearly it's said that 'The police told us that we couldn't stand on this side of the road. Therefore the folks followed police orders and went to the other side. While doing so they saw another policeman leading another group of practitioners in an orderly parade right towards them. Then the two groups converged.' Later on when I saw that CCP propaganda falsely claimed that Falun Gong practitioners besieged the Zhongnanhai Central Government Compound, all of a sudden I realised that in reality the police intentionally led the practitioners into a situation where it appeared they surrounded Zhongnanhai to serve their propaganda needs to somehow "justify" the persecution in the eyes of the public."

In those years, Jiang, risking everyone's condemnation and abusing his power, started the persecution of Falun Gong with his determined will. Few other Party mandarins agreed with him. Yet, Falun Gong practitioners stuck with the belief in Truthfulness-Compassion-Forbearance and persistently opposed the persecution, peacefully and reasonably. They won the praise and appreciation of people all over the world.