(Clearwisdom.net) On April 25, 2008, Falun Gong practitioners held activities in front of the Chinese Embassy in Stockholm and the Chinese Consulate in Gothenburg, commemorating the peaceful appeal in Beijing of April 25, 1999. 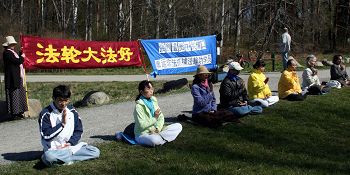 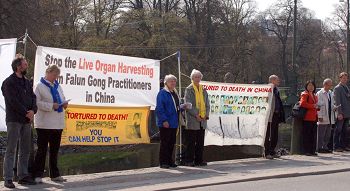 Practitioner Anders Eriksson said: "The purpose of my coming here today is to express my protest of the CCP. For nine years, the CCP has brought suffering to Falun Gong practitioners, people who believe in Truthfulness, Compassion and Tolerance! The persecution of Falun Gong must be stopped! I think that all people should stop the CCP from persecuting, torturing and killing these kind, innocent and good people by using such cruel means! Such deeds are illegal."

In 1998, Anders Eriksson started practicing Falun Gong. He feels very good when doing the exercises. He believes he has learned the true meaning of life and has been gradually improving himself using the principle of "Truthfulness, Compassion and Tolerance". And his attitude to others has become more harmonious.

Anna Bender started practicing Falun Gong in 1995. She felt a kind of peace in her heart when participated in earlier classes by Mr. Li Hongzhi. In the past, she was very friendly to others and now she is even more so.

In her speech, Viveka Enoksson said: "What a pity that Falun Gong is not allowed in China. They are very good exercises. I have practiced for almost ten years. I have become even more peaceful and kinder and not easily angered as I used to be. Falun Gong has benefited me both in mind and body. I think that Chinese people should also have their rights of belief. Today, we are here showing the Chinese Embassy and passers-by what is happening in China. We will keep calling on kind-hearted people in all circles to help stop the persecution and killing, and support justice and kindness!"

Gulli is a store owner living in Stockholm. She said: "I am here today telling those in the Chinese Embassy that Chinese people and the Chinese Communist Party (CCP) are not the same thing, which should be made clear. The CCP promised that it would respect human rights but there is still no human rights in China and they are now still arresting many human rights advocators and Falun Gong practitioners in great numbers. And the CCP has been doing something wrong.

Li Zhihe participated in the Beijing appeal on April 25 1999, and personally witnessed the whole story of 10,000 people appealing. Mr. Li said that it was "totally a premeditated plan that the CCP labeled the peaceful appeal of 10,000 Falun Gong practitioners as 'laying seige to Zhongnanhai'. One of its purposes was to deceive people and another was to find an excuse to further crack down on Falun Gong."

He said: "I remember very well what happened on April 25, 1999. On that day at 6:00 am, I went to Fuyou Street. Although there were many people there, they were well in order. There were no slogans and no loud voices and the whole process was very peaceful. In fact, what we only wanted to do was to tell the Appeals Office our real situation. We had no wish of going to Zhongnanhai. The Appeals Office is near Zhongnanhai. All of us were standing there according to the arrangement by police. We stood there quietly waiting for the result of the negotiation. Looking back now, what the CCP did was premeditated. They are master manipulators. It twisted a peaceful appeal into an excuse to suppress Falun Gong."

Originally, Li Zhihe had an enviable family and a job. He became a target of persecution because of his participation in the peaceful appeal of April 25. The 610 Office was planning to lock him up for brainwashing. Because of their firm in belief and resistance to the persecution, he and his wife both lost their jobs. They had to leave China and reached Sweden by passing through many different places and have been accepted by Sweden as refugees.

Li Zhihe said: "It is already nine years that the CCP has persecuted Falun Gong. For these nine years, with the heart of kindness and forbearance, Falun Gong practitioners have been telling people why the CCP wanted to persecute Falun Gong. [...] We don't have any political ambitions. We simply want the persecution to stop."

Li Zhihe said: " Now the CCP is illegally and frenziedly intensifying its persecution of Falun Gong practitioners in China using the occasion of the Olympic Games. [...] I call on the international community to pay attention to the nine-year and cruel persecution of Falun Gong practitioner happening in China, hoping all governments in the world can stand out in support of justice and kindness, and end the catastrophe as soon as possible."

“Washington DC: Victims of Communist Memorial Foundation Director Calls for An End to the Persecution of Falun Gong (Photos)”