(Cleariwisdom.net) An executive officer of the Taipei Economic and Cultural Office in Sydney, Mr. Lin David, watched the Divine Performing Arts Chinese Spectacular twice. On the evening of April 2, 2008, he saw the show at Sydney Entertainment Center and experienced the purity, compassion, and beauty of Chinese traditional culture.

Divine Culture is an Important Part of Chinese Traditional Culture

Mr. Lin David praised the Divine Performing Arts. He believes that traditional Chinese culture is part of every Chinese person's life. He was deeply touched by the show and said, "The performance expressed the beauty of the entire Chinese culture."

"Chinese culture used fairy tales to tell about the existence of the gods. We were taught to respect the heavens and the gods from the time we were born. This is an important part of our traditional culture. Only if we follow the gods and pursue beautiful things can the human world discard evil and promote goodness."

Compared to the beautiful divine culture that the Divine Performing Arts displayed, Mr. Lin was very worried about the chaos in mainland China under the Chinese Communist Party's atheist rule. He said, "It makes me feel very sad that the CCP is ruling China right now. They propagandize for communism and do not believe in the existence of gods. They think that they can control history by material force."

He pointed out that if the path of history can be controlled through material wealth, then the reason for gods would not exist any more. Any rich person or people who have material power can do whatever they want and they will think they can control others' lives. Under this kind of distorted value system, the only valuable and meaningful thing for them is to acquire more of whatever they can control, for example, money and material goods. He sighed, saying that this was the main cause of China's chaos.

Mr. Lin strongly affirmed that the Divine Performing Arts, which promotes Chinese traditional culture, will have a big impact on rectifying the social chaos in China. He said, "The power of tradition cannot be neglected."

He emphasized, "We believe that Chinese traditional culture is a part of uss. We believe in beautiful things. Chinese people are very kind. We knew to respect the heavens and gods as soon as we were born and we are constantly relearning it. We believe that goodness will eventually conquer evil and that Chinese traditional culture will eventually conquer the evil atheism."

Mr. Lin said, "The Divine Performing Arts expressed the inner meaning of the Chinese nation." After watching "The Risen Lotus Flower," he was deeply touched and said, "I think people should support and like Falun Gong. It believes in "Truthfulness-Compassion-Forbearance." If people are against it, they will be standing on the opposite side, which is Deception, Cruelty, and Violence. Deception, Cruelty, and Violence are not good things and people don't like them."

Mr. Zhang, who was a Doctor of Chinese Medicine in China, was very excited after the show. He said, "The Divine Performing Arts lets the whole world, especially the Western world, recognize our Chinese divine culture. It will unite all the people of conscience and lead the Chinese people, especially overseas Chinese people, to retrace the roots of Chinese divine culture. It will build a strong foundation and have a very good influence."

Mr. Zhang also sighed, saying that he hasn't seen such an exquisite example of Chinese culture for a very long time. "After the Great Cultural Revolution, the so-called arts were just to brainwash people with killing and nothing else. The CCP caused extreme damage to Chinese people's minds."

Mr. Zhang was honored and proud to see such a wonderful, true Chinese performance. He is also proud of being able to step forward and tell the truth for justice, just like the idea expressed in "The Power of Awareness" presented by the Divine Performing Arts.

Man from Mainland China: Such a Performance I've Never Seen in China 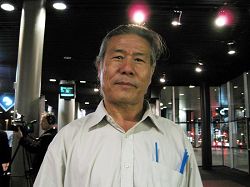 Mr. Zhang Tingliang likes Chinese opera and Chinese classical music. He said, "I feel this Divine Performing Arts [show] is a complete art. It highlighted Chinese classical arts. I haven't seen these wonderful arts for many years in China."

He sighed, "The mainland Chinese basically have no access to the arts anymore under the CCP's rule. The Chinese people have no chance to enjoy such wonderful arts. The CCP has already destroyed Chinese traditional culture completely, especially since the Great Cultural Revolution. I truly experienced the damage myself."

Mr. Zhang said he and his friends were all very gratified after watching the performance that promotes Chinese traditional culture outside China. He said excitedly, "It has really been a very long time since I have seen such a wonderful performance. The Divine Performing Arts promotes genuine Chinese culture and arts, especially the arts of the ancient glorious age of the Tang Dynasty and some of Dunhuang's arts. It truly restores the pure Chinese traditional arts."


Before he left, he emphasized once more that this was the first time he had ever seen a performance by the Divine Performing Arts of New York. He thought that they truly promoted pure Chinese traditional arts. He thought the performance was really good and if he had any chance in the future, he would definitely go to a Divine Performing Arts show again.

“Chinese Vocalist: The Choreographer is Awesome--The Show Is Soul-Stirring (Photo)”