On the ninth anniversary of the April 25Appeal, Falun Gong practitioners from Spain gathered in front of the Chinese Embassy to hold a commemorative activity and condemn the Chinese Communist Party's (CCP) persecution of Falun Gong. 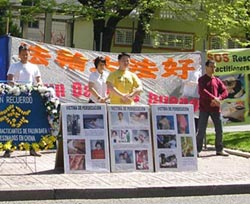 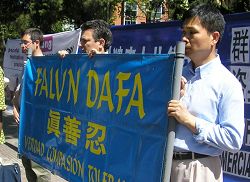 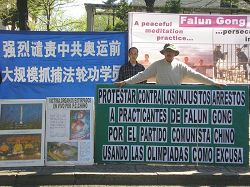 Practitioners from Spain commemorate the "4.25" peaceful appeal in front of the Chinese Embassy and protest against the CCP's ongoing persecution 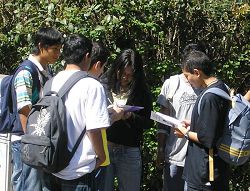 Falun Gong practitioner Joaquin said in a speech, "Falun Gong teaches people to be good, to discipline themselves according to the principle of "Truthfulness Compassion, Tolerance", and to think of others first in any situation. After I began practicing Falun Gong, I experienced big changes, not only improvement of my moral standard, but I also became healthy physically. Every true practitioner experiences this. However, the wicked CCP launched the rampant persecution against such a good practice out of its evil nature. It seeks to destroy the morality and conscience of humanity."

Jaoquin added, "For the past nine years, practitioners have persisted in clarifying the facts about Falun Gong and the persecution. The purpose is to help people clearly recognize the evil nature of the CCP and renounce the party, and choose a bright future for themselves."

Mr. Carlos, a human rights lawyer, also attended the activity. He said, "The Jiang Zemin group will eventually be punished for the crime of genocide against Falun gong practitioners. Currently, the Spanish court is conducting an investigation into the Jiang's group's crimes of persecution. We believe that in the near future, Jiang's gang will be put on trial and receive the judgement of the people. Persecuting righteous belief is not allowed by human law, and natural justice does not tolerate it either."