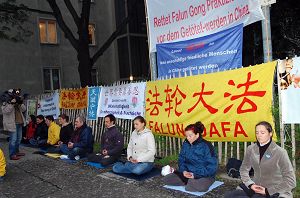 However, out of personal jealousy, former Chinese president Jiang Zemin launched the massive persecution against Falun Gong on July 20, 1999.

The nine-year-long persecution has not deterred Falun Gong practitioner around the world, and instead, practitioners worldwide have launched activities exposing the persecution. More and more people have joined the cultivation of Falun Gong, as the practice has been spreading around the globe.