Divine Performing Arts presented the Chinese Spectacular at the Adelaide Festival Theatre in Southern Australia on April 14, 2008. Many people from different walks of life gathered inside the renowned venue. Julie Nixon, CEO at an iron foundry and her friend Fiona Evans watched the show together and shared their excitement afterward. Ms. Nixon said, "The Spectacular is illuminated with innocence and beauty. I think the show is fantastic!" 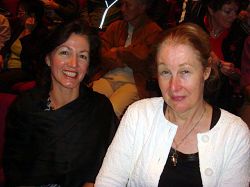 Julie Nixon, CEO at an iron foundry and her friend Fiona Evans both agreed, "The Divine Performing Arts is pure beauty. Their performance is exquisite!"

Nixon continued, "It was very good, I loved the Mongolian Bowl Dance and the drums."

Her friend Fiona Evans, an accountant, said, "I agree. I most enjoyed 'Lady of the Moon.' I loved the colors; I loved the dance. I think the male dancer was extraordinary. I also liked the bowl dance."

Ms. Evans said the Spectacular made her want to learn more about Chinese culture. "I want to see and listen to more things [about China]. I love the story lines and the hosts' introduction, and the information they gave us. I really want to know more."

Nixon, on the other hand, took a liking to the ethnic dances, "I enjoyed the short stories. Every performance had its own independent plot; I love that. I also enjoyed watching the expression of different minority groups. They are beautiful, just beautiful."

They praised soprano Huang Biru, "We loved her voice in 'Knowing the Truth' and 'Be Saved.'" Nixon added, "Although they sang in Chinese, the message was marvelous."

David Wong, a senior real estate manager in Southern Australia and his wife attended the VIP reception before the Spectacular. After the show, Wong said, "I felt the message of compassion." 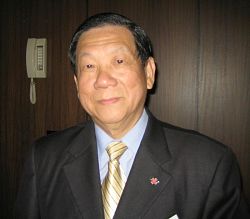 Wong is a third-generation Chinese-Australian who has lived in Southern Australia for 20 years. His grandparents emigrated from Malaysia. Wong said, "I'm completely bowled over by the brilliance of the performance and the broad perspective. I think they are great and they illustrate 5,000 years of Chinese culture. The music was terrific and the dancers were beautiful. I think this is second to none."

Wong said what touched him the most was the dance, "The Loyalty of Yue Fei," "Because it teaches you to be loyal and to be faithful to the country."

"I don't know Chinese very well, yet I felt that Divine Performing Arts leads you toward a good path and teaches you how to face reality. It's indeed outstanding" He added,
"They should have come here a long time ago."

Ivan Dnistriansky, president of the Association of Ukrainians in Southern Australia, attended the opening show on April 14, 2008 with his wife. During intermission, he told the reporter, "I found it to be very, very colorful. The costumes are beautiful. I find that the dancing is very graceful, particularly from the female's point of view... They're graceful movements, and it reminds me a lot, in a way, of Ukrainian dancing."

Mr. Dnistriansky said, "I think this is the best presentation that I've seen. I mean that sincerely; it is."

Dnistriansky remarked that he could draw parallels between Chinese culture and his own Ukrainian heritage, "Because Ukrainian costumes are very colorful, and so are Chinese. And our culture is very much into dance and also music, as the Chinese are."

His favorite piece was the drumming in the final scene, which he described as "very fiery."

Mrs. Dnistriansky said that the piece, "The Power of Awareness" was her favorite. She said, "It just reminds me of the youth, the young children, that there is hope. Because you hear so much about all these drugs and all the negatives, and this is all for truth, and all that compassion in the backdrop, the way it just went to the end with all the children... it moved me."