(Clearwisdom.net) Adelaide, the capital of South Australia, is renowned as a city of the arts. It is a city in which world class artistic performances take place each year, and views on artistic standards are set high. On April 14, 2008, Divine Performing Arts of New York presented the Chinese Spectacular at Adelaide's Festival Theatre, and attracted elite people from various fields. Applause filled the theatre throughout the show, and each performance was enthusiastically received with praise. Former MP of the South Australian Parliament, The Hon. Julian Stefani said, "The whole show is very interesting and is a most wonderful, magnificent show." He felt the show was outstanding, "In my view, one of the best performances that I've ever seen." 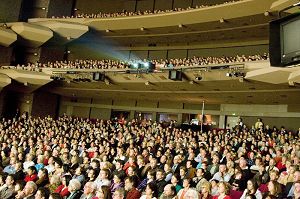 Divine Performing Arts of New York presented the Chinese Spectacular to a full house at the Festival Theatre in Adelaide.

The Hon. Julian Stefani said that the show, "embodies the culture and the great tradition of Chinese people." He continued, "I would recommend [the show] to everyone, not just because it is such a huge production, but also for the costumes, and all the movements, the dance. The whole show is very interesting, and it is a most wonderful, magnificent show. "

Mr. Stefani felt that all the performances in the show were excellent, and in particular, the dramatic sequences gave him the deepest impression. He revealed that the performance that struck him the most was "Lady of the Moon." He said, "I think the message there was a wonderful message of a new beginning."

With regard to the Chinese Communist regime's interference with Divine Performing Arts shows around the world, Mr. Stefani said that if the show could be presented in China, it would also be very successful, touching the hearts of many Chinese people. "It would be a pity that this show is not allowed in China, because I think this is part of sharing the wonderful traditions and cultures of Chinese people," he said.

Mr. Stefani was deeply touched by another scene that depicted Chinese people under persecution, "The persecution of people, where the revival of spirit continues; under persecution and repression, the spirit survives, that was a wonderful message to us."

Mr. Stefani said he hopes that Divine Performing Arts will return to Adelaide in 2009.

Public Speaker and Author: "'The Risen Lotus Flower' makes us more grateful and appreciate what we have"

After seeing the performance "The Risen Lotus Flower," author and public speaker Mr. Peter Salerno was particularly moved. "The Risen Lotus Flower" depicted the tragic persecution of courageous Falun Gong practitioners in China. Mr. Salerno said, "I think that is the best part, because a lot of people wouldn't know that [the persecution] is even going on, we only hear what [the Chinese government] wants us to hear. So to me, things like this make me much more grateful, and appreciate that we have much, much more, so thank you for doing it." 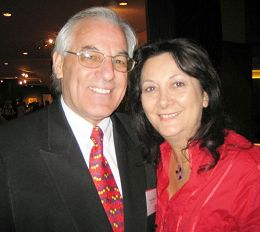 Author and public speaker Mr. Peter Salerno attending the first show in Adelaide with his wife.

Mr. Salerno has always liked theatre. He praised the exciting performances, "I like the drumming, I love the dancers, the costumes and color, and the stories that they tell. I thought it was well done! Very well done. Keep up the good work."

Mrs. Salerno said, "I'm really enjoying it. I love the softness of the costumes and the movements, yet the strength that's underneath it, and the humorous MCs."