The Uncompromising Courage Art Exhibition was held from March 8 to April 6, 2008 at The Gallery at the State Theatre Center for the Arts in Easton, Pennsylvania. The 15 paintings in the exhibit showed the brutality forced on Falun Dafa practitioners from the persecution, the effects it has had on their loved ones, and the practitioners' determination and faith.

The mayor of Easton, Mr. Salvatore J. Panto, Jr., attended the April 6th closing ceremony, and invited the artists to bring their works back again to Easton in the future. 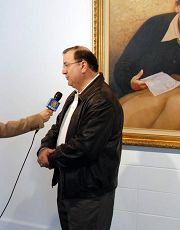 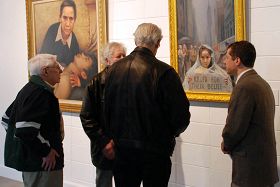 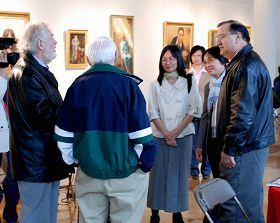 Guests and artists talking at the closing ceremony

Artists were among the many people drawn to the month-long exhibition, and visitors were deeply impressed. Guests moved slowly past the paintings, pausing for a long time, mesmerized by the facial expressions in the artwork. "Excellent, really moving. The eyes are incredible," said Bob Redmond, an artist from nearby Phillipsburg, as he looked at the painting, "My Son". The painting shows a woman holding her persecuted son's dead body.

"Absolutely incredible paintings," said Karl Stirner, the operator of a local sculpture studio. He compared the quality of the paintings to the old masters and added that the subject matter was depicted in an "incredible and wonderful way."

According to local artist and exhibition curator Wei Jane Chir, the style of the paintings are "Neo-Renaissance," since the artists used classical oil painting techniques that were developed by the Western masters.

Anthony Marraccini, president of the Arts Council of Easton, attended the March 8th opening ceremony and cut the ribbon to open the art exhibition.

Mayor Panto is an art lover. Facilitating the growth of art in Easton has been one of the mayor's goals since taking office several months ago. At the closing ceremony he said he was very pleased to have these paintings come to exhibit in Easton. "These artists are extremely talented. They transmitted a strong message, which made you feel sad for those people who cannot lead a free life as they wished. I think they did very well. I hope that they can come to our city again."

The mayor also said that the painting "Sadness of an Orphan," impressed him the most. "It's so hard to be an orphan. She has to lead a life independently without her parents. This is what I saw in her eyes." The painting depicts a little girl who is left orphaned because her parents are dead as a result of the persecution of Falun Dafa by the Chinese Communist Party.

One member from the Arts Council of Easton said that local artists spoke highly of the paintings. She told a story about her three granddaughters. "They stood in front of the paintings, and tears ran down their faces. They were moved by these paintings to such an extent. It is very important to have young people like them, who are 17, 18, and 24 years old, come to see these paintings, and to understand the meanings behind them." 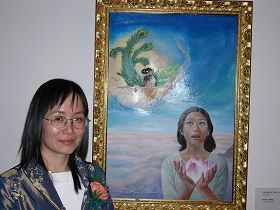 Artist Humin Wang beside her painting, "Coming for You." Ms. Wang was illegally detained several times when she lived in China.

Artist Huimin Wang was arrested multiple times when she lived in China. Her longest imprisonment was from the end of December 2000 through most of April 2003. She first endured brutal conditions in a forced-labor camp in Guangzhou Province. When her one-year sentence expired, she was not released, but instead was sent to a series of brainwashing centers. Prior to her release, she went on a hunger strike for four months, during which she was force-fed and drugged. In 2005, Ms. Wang was arrested again. After a month-long hunger strike, she was released with the help of Falun Dafa practitioners living outside China, and was able to immigrate to the United States. She now lives in New York.

Artist Xiaoping Chen said that it's the responsibility of artists to record history, and that this is the source for her creations. Standing in front of her new work depicting Falun Dafa practitioners' truth clarification effort in Manhattan, New York, she told the reporter, "When I first came to New York in 2004, it was during the summer, and I saw Falun Dafa practitioners in Manhattan. They got approval to hold torture exhibits on the street. They did so for over a year on a daily basis, rain or shine. I wanted to capture this historic moment with a painting."

“Adelaide, Australia: Chinese Student: "A Show Chinese People Can Be Proud Of" (Photo)”