Adelaide, Australia: Chinese Student: "A Show Chinese People Can Be Proud Of" (Photo)

(Clearwisdom.net) On the night of April 14 2008, Divine Performing Arts performed to a full house at the Adelaide Festival Theatre in Adelaide, Australia. An audience of fifteen hundred applauded and cheered.

Mr. and Mrs. Zhang are new immigrants from Guangdong Province, China. Mr. Zhang said, "I just said it. Once isn't enough. They should come more often every year, for example, 4 or 5 times every year." Mrs. Zhang added that she liked "Lady of Moon" and "Tang Dynasty Court Drummer" best.

"As a Chinese, I want to watch more shows. If the Chinese Spectacular returns, I will come again." Zhang said.

Miss Lu is from Chengdu City, China. She is currently studying physical therapy at the University of South Australia. She was excited and said, "I am so proud to see such a show outside China. I am proud of it. It makes me proud to be Chinese. This is a show that Chinese people can be proud of." 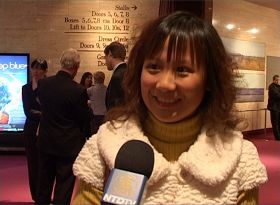 Miss Lu came from Chengdu City, China and is currently a student studying physical therapy in University of South Australia.

Lu said she watched many shows both in China and abroad and she praised Divine Performing Arts for its professionalism. As for the shows she watched before, "They are not comparable to the Chinese Spectacular."

“"Beijing Olympics! Put Down Your Handcuffs!"”