In China, the strictest administrative punishment that can be given to a prisoner who "violates regulations" is called "confinement," but the law stipulates that this confinement cannot exceed 15 days. Prisoners in "confinement," according to the law, cannot be beaten, corporally punished, or mistreated.

"Strict discipline" is, from a legal perspective, a lower level of punishment than "confinement," but with "strict discipline" there are no clear legal rules as to what may comprise the "discipline."

At Tilanqiao Prison (and many other prisons in China) "strict discipline" is actually more severe than "confinement," with abusive beatings, corporal punishment, and mistreatment the norm. "Strict discipline" has become a synonym for torture. This disregards the law and tramples human rights.

"Strict discipline" is lighter than "confinement" from a legal perspective, but it is actually far more severe in terms of the degree of beatings and mistreatment. 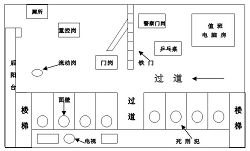 The west wing of the fifth floor of the No. 2 Ward is the strict discipline area of Tilanqiao Prison

Authorities in Tilanqiao Prison do their utmost to ensure that news of what goes on inside its "strict discipline" area doesn't leak to the outside world. Guards are free to do whatever they wish. "Strict discipline" cells are only 3.3 square meters in size, even smaller than confinement cells, and practitioners are imprisoned there for long periods of time. Every day, they sit on the uneven tiger bench. If their posture is slightly off, the "safeguard inmates" beat and kick them. If they disobey them, they will have their hands cuffed behind their backs and tied to the ground with stubby shackles (the shackle is less than 20 centimeters long).

There's no legal rule for the duration of handcuffing, so the prison guards can handcuff the prisoners for as long as they want. Some practitioners were even handcuffed for nearly a year. The guards can insult, scold, or reduce rations at will.

Falun Dafa practitioner Mr. Jiang Yong was taken to the "strict discipline area" and beaten because he protested the persecution and shouted "Falun Dafa is good." This resulted in wounds all over his body. His mouth was disfigured from being tied with a thick rope, his feet were tied with rope used to tie up death-row criminals, his hands were handcuffed behind his back, and he was not allowed to sleep for four days. Because he was in critical condition from the beatings and his life was in danger, he was taken to the Nanhui Prison Main Hospital for emergency treatment.

Falun Dafa practitioner Mr. Du Ting was imprisoned in the "strict discipline area" for 18 months, from March 2005 to December 2006.

At the Tilanqiao Prison, the guards torture any practitioners whom they think are slacking or have made appeals. They fear that their crimes of recklessly trampling human rights will be publicly revealed, and the blame will be placed on them.