The New York Divine Performing Arts (DPA) New York Company gave its first Chinese Spectacular show at the Labor Recreation Center in Kaohsiung County on March 4, 2008. The tickets were sold out and many government officials and professionals from all walks of life came to the show. Divine Performing Arts presented pure truthfulness, kindness, and beauty from China's five thousand year history for the audience. 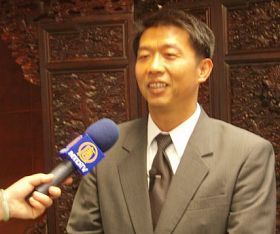 Mr. Hsu Chih-Chieh, mayor of the city of Fengshan, said he hopes all the residents in Fengshan could come to this show

Mr. Hsu Chih-Chieh, mayor of the city of Fengshan, said, "Only a society with love and kindness can be an advanced, satisfied, and happy society." Mayor Hsu recommended the Divine Performing Arts Chinese Spectacular to all, and expressed his wish that all residents of Fengshan could come to see the show.

Mr. Hsu praised the artistic presentation by DPA. He was most impressed by the program "Lady of the Moon." He's known the story since he was little. The combination of the dance and the stage background made it look real, including when the lady flew up to the moon. 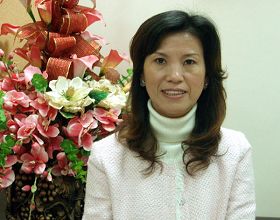 Ms. Chang Mei-yao, commissioner of Niao-Sung County, had the opportunity to see the DPA Chinese Spectacular for the first time. She mentioned things that she thought were special about the show, "It combines East and West, blending Chinese culture into the show, and it passes on the messages of loyalty, kindness, and righteousness in the forms of art and religion, and educates people."

Ms. Chang has been supportive of cultural events. She thinks the performance the DPA brought to Niao-Sung gave the people a different choice. She thinks the show is worth watching and next time she said she will bring more colleagues to support the event.

“Geneva, Switzerland: Erhu Performance at the Chinese Spectacular a Favorite for Many Westerners in the Audience”