The Divine Performing Arts (DPA) show in Taipei continues to receive rave reviews from the audience. 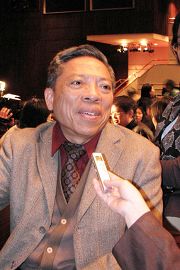 Sun Qingji, Chairman of Vocal Artist Association of the Republic of China, is also a Bass himself. He and his wife watched the fifth show in Taipei on March 17.

After the show was over, he said, "Dance itself is a very exquisite art. The DPA dance has really shown divine performing spirits. The whole program was very well designed. I was really surprised to see various dances featuring ethnic Han, Man and Mongolia Chinese."

As a vocalist himself, Mr. Sun said the Baritone was terrific and the music, which utilizes both Chinese and Western musical instruments, was very harmonious. He was especially impressed with the drum programs. He thought they were a good combination of strength and beauty.

Mr. Sun said, "The programs about people's belief can help purify one's heart and encourage one to realize the value of one's life." He thinks creativity is the highest value of art. He felt it's very encouraging that the DPA was able to present the truthfulness, compassion and beauty of art so creatively.

Mrs. Sun is a pianist. She thought the music was very soft and gentle. The drum programs showed both strength and beauty. She was impressed to see every one performed so well.

“Director of Puyan Township: "Such Clear Messages Purify the Hearts of People in this Chaotic World" (Photo)”