(Clearwisdom.net) ATV is a local television station in Antwerp. Antwerp is the capital, and the most important business centre in Belgium. It is a port city and the capital of the Flanders region. The population in the metropolitan area is 1.25 million.

In a program about the DPA Chinese Spectacular, a local TV host introduced the show as the "best show in the world," and said that it "demonstrates traditional Chinese culture." "They have demonstrated to the public performances without any Chinese Communist Party (CCP) culture and truly reflected China's 5,000-year civilization, and the essence of the traditional culture." 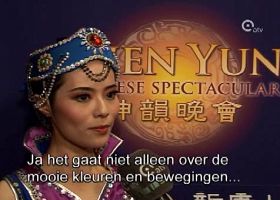 Ms. Xiong, a member of the Divine Performing Arts, was interviewed

DPA representative Ms. Xiong said: "The performance not only demonstrates beautiful colors and difficult movements, but also presents spiritual content. It is well-known that Chinese culture has beliefs. We always believe in Heaven and God, and people all know that they should behave well, do good things, and adhere to high ethical standards. All these are demonstrated by our dances and songs." 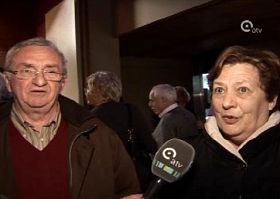 Members of the audience interviewed by TV station

The couple said: "It seemed really in another world. Oh, it is much more beautiful than our (western) culture. They are very beautiful."

When interviewed, another lady said, "The Chinese culture is not only very well demonstrated in this show, but it also demonstrates the serenity and peace of the divine and Buddha. It touched my heart."