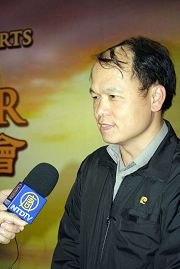 “CEO of Jewelry Company: "Something Deep in My Heart Was Awakened" (Photo)”