Renowned Painter in Taichung: "Indeed the Show Has a Fully Justified Reputation!" (Photo)

(Clearwisdom.net) On March 10, 2008, many renowned artists and politicians attended the third Divine Performing Arts Chinese Spectacular show in Taichung, Taiwan. The deputy manager of the Taiwanese Museum of History and Taiwan Genealogical Collections Lin Chin-tian, and renowned artist from Taiwan's central region Yang Yan-nang attended the show together. The two good friends are well-known painters. Below is an interview with Lin Chin-tian and renowned artist Yang Yan-nang. 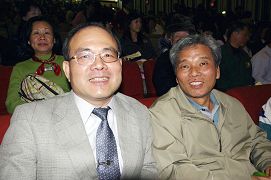 Preserving Authentic Chinese Culture Is Not an Easy Achievement

Deputy manager of the Taiwanese Museum of History and Taiwan Genealogical Collections Lin Chin-tian said, "During the Cultural Revolution, a part of Chinese culture was destroyed. The way in which the Divine Performing Arts has upheld and preserved authentic Chinese culture through dance, through art and music, to such an extent, is really not an easy thing to achieve. Particularly given the caliber of the performances, I think it is definitely not something that can be compiled in a short period of time. They must have continuously endeavored for a long time, and attained the results through rigorous training. Really remarkable."

Renowned artist Yang Yan-nang said that he liked the masculine performances, especially 'Drummers of the Tang Court', "Very energetic, the movements were bold, and the dance full of power and grandeur. The sound can lift one's spirit and morale, I really liked this performance." Lin Chin-tian also said warmheartedly, "In artistic movement, there is strength and softness, and the Divine Performing Arts conveys both strength and softness. It is really not an easy task, its a remarkable achievement. The Divine Performing Arts is not only a form of culture, it is also a display of art."

A Blend of High Technology and Art--Very Inspiring and Admirable

Both artists expressed their views regarding the color and environment of the entire program,. Mr Yang said, "It's great! The atmosphere was magnificent, especially the backdrop. It's so wonderful!"

Mr. Lin said, "The Divine Performing Arts has combined high technology, including computer animation. For example there was rising smoke in "The Loyalty of Yue Fei," and without the use of animation, it would probably have been difficult to produce such a visual percept." Mr. Lin felt that the blend of technology and arts was admirable.

Mr. Lin said, "The backdrop was very special. I very much liked "Lady of the Moon." With each arrow that was shot..."

Before he could finish the sentence, Mr. Yang said, "They turned into crows! The nine suns dropped until there was only one left, so if it was shot there would be no sun! There was also that scene when Chang Er flew to the moon, the animation... "

Mr. Yang said again, "It was very realistic. I asked him [Mr. Lin], 'Is that a real person or not?' It was extremely lifelike!" The two friends seemed to have felt similarly toward the show, and joyfully discussed their experiences.

Mr. Lin said, "The special effects were really of a high standard. It is not easy to achieve that standard. To depict ancient legends using modern technology, and combine tradition with technology, is really remarkable, very good."

They Walked as if They Sere Flying--Very Skillful!

Yang Yan-nang said, "All the colors in the show were very well coordinated! It was vary harmonious! Some colors were contrasted to express the dynamics and vitality. The female dancers moved very beautifully, and I noticed their feet. They walked as if they were flying. Very skillful!"

Such High Caliber. How Did They Train for It?

While praising the show, Lin Chin-tian could not help but ask the reporter, "I would really like to know how they trained to such a professional caliber, especially since they are from Western countries, but are able to preserve and present traditional Chinese dance with such high standards, it's truly remarkable!" Mr. Lin also said, "Every performance had certain meanings to convey, and each one requires the audience to learn through experience. It is a language of thought, ideology expressed through body movement, so one needs to experience it with the heart. The entire theatrical arrangement, certainly has a core spirit to convey."

Finally, Mr Yang said, "It's remarkable that the Divine Performing Arts can perform on Broadway, and they performed 15 shows in a row, it's marvelous. Tonight, after seeing the show, it indeed has a fully justified reputation."

Yang Yan-nang has particular achievements in oil canvas paintings. Since 2002, he has attained three first and second prizes for oil on canvas painting in the "Provincial-Level Art Exhibit," and has the honor of permanent exemption from examination.

Lin Chin-tian is the current deputy manager in the Taiwanese Museum of History and Taiwan Genealogical Collections. As a former academic in public policies research, Lin began painting in 2001. Within a few years, he had made substantial achievement, and is a hard working business sect painter with aptitude and potential. In 2004 Lin was invited to attend the International Art Exchange Exhibition in the US, and has held a number of touring exhibits around Taiwan. In 2007 he began to work in the honorable position of secretary-general in the Salon of Taiwanese and French Artists Association.

“Chairman of a Famous Enterprise: "Divine Performing Arts Has Attracted Attention and Admiration from Chinese All Over the World" (Photos)”