(Clearwisdom.net) The Divine Performing Arts of New York touched the hearts of audiences in Tainan, Taiwan, with their performances from February 29 to March 2. 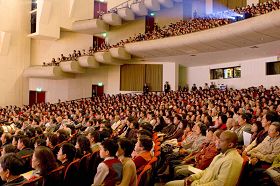 On the morning of March 2, the fourth show in Tainan plays to a full house

Social Worker: "I Will Tell My Family to Buy Tickets Quickly"

"Marvelous! The design and the choreography were outstanding. The way they used the multi-media was superb. One felt the 3D animation effect from the backdrop. The show was truly beautiful and great," said social worker Ms. Liu. She added, "The dancers were living the performance during the entire program. It was perfect, just super!"

She said, "My eldest sister lives in Taipei, and my elder sister-in-law in Kaohsiung, I will call them the minute I get home and tell them to buy tickets quickly."

Library Volunteer and Son: "We Bought Tickets the Minute They were Up-for-Sale!" 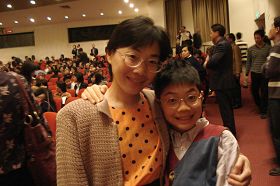 Ms. Hsieh said, "We have been reading the Epoch Times. Therefore, we found out early about the performance by the Divine Performing Arts. We also saw the show last year. The stage set up during the scenes and costumes are great. But, most importantly the smiles of the performers are very sweet and very sincere. The entire show was fantastic!"

She continued, "We bought our tickets the minute they were up-for-sale sale. It is indeed a great show! We were deeply moved by it!"

Ms. Hsieh added, "Even our young child likes it. My son still clearly remembers last year's programs. He particularly enjoyed the young Mongolian herdsmen mirroring riding on a horse. He remembers it fondly. We always think that the Divine Performing Arts is great! Therefore, we asked friends to come with us to the show. We'll come again next year! We look forward to it!"

A parent with the surname Chuang chaperoned the students. She also loved the show. She said, "The teacher recommended that we watch this show and made sure we were able to come. I feel advocating 'Truthfulness, Compassion, Forbearance' is highly significant and good for the children's education." 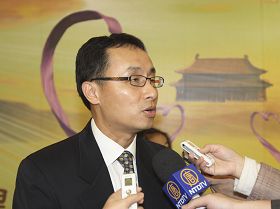 Dr. Chu Chin-Chen is the anesthesiologist-in-charge of the Yungkang City Chi Mei Medical Center. He said, "I was moved by almost every program. I was touched by the music and dance performances and impressed by the technical coordination. Concerning the cultural aspect, it helps Chinese people understand the beauty of their art and culture. The show also instills kind thoughts, some compassion and contributes to China's tradition. I feel today's young and actually all people in society need this kind of awakening."

"The first program 'Descent of the Celestial Kings' was amazing. The backdrop showed so many people descending from heaven. And then the performers walked onto the actual stage, as if coming from the backdrop. Such an imagination! It felt real! It was great!"

He put his feelings into words and said that the show plays a kind of inspirational and educational role, "This is very good! Society now is primarily materialistic. The Chinese society lost its tradition. Stories about truthfulness, compassion and beauty' are ignored. I feel that today's society needs such shows and such awakening. Therefore, I will bring more people to see it next year."

Businesswoman: "I Felt Like Crying! I Want to Learn Falun Gong" 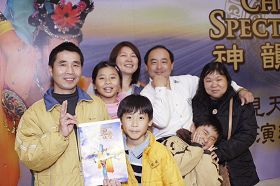 Miss Wenzi said, "The performance is very special,! It surprises, amazes and touches people! I feel quite special to be able to see something like the 'Drummers of the Tang Court.' The entire performance is majestic, and thought provoking."

Miss Wang often travels around the globe for business purposes. She attends all kinds of performances. She said, "In 'Lady of the Moon', the backdrop matches the stage. It brings a feeling of surprise to the audience. It is as if you are in the scene, and watching Chang E flying up to the moon."

She said, she felt touched by "'The Risen Lotus Flower.' I felt like crying at that time! I want to learn Falun Gong!" 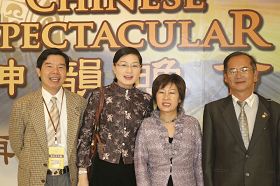 Ms. Kuo Mei-Chin, Director of the Tainan County International Management Council, said, "I noticed that all performers had a smile on their face. I felt that they are very kind. This is very different from the shows I have seen before." Ms. Kuo shared that the costumes are very bright and colorful. The dancers' movements are very uniform. She felt that the beats filled people with enthusiasm.

She also felt that the stage effect is very lifelike, especially the computer animation. They were extremely vivid and quite good. 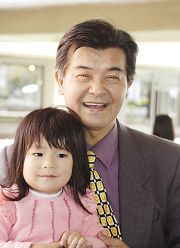 Dong-Nan Land Office Director Chen Tsia-fu said that today is his birthday and his granddaughter and friends came with him to see the Chinese Spectacular. He saw the show last year and was amazed, so he wanted to see the show again this year. He asked many of his colleagues, relatives and friends to see it.

He was most impressed with the scene "The Fruits of Goodness." He had a multitude of feelings after watching this scene. He said that social mores have now fallen to such extent. You can see the young people wearing outlandish clothes. Anything goes! I felt deeply touched after watching the show today.

High School Student, "Just about Everything Was Fabulous" 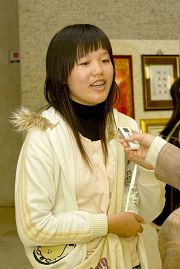 Wang Yi-Chun, a student who majors in art design in Hou-Pi Senior High School, said, "About ten students came to the show today. It was a gift from our teacher, as we are graduating soon. We thought the backdrop, design, costumes, colors and just about everything was fabulous."

Wang said: "My favorite is the scene with the beating of the drums. It displays braveness and courage of the soldiers in the Tang Dynasty. After I watched "The Risen Lotus Flower" and "The Power of Awareness," I felt that these scenes help in the improvement of social mores. I also feel we should unite against oppressors!"

“Equipment Company Senior VP: "Every Piece Is Unique, While Also Complimenting Each Other" (Photo)”

“Scottish Musician in Taiwan: I Want to Sing Songs from the Spectacular (Photo)”