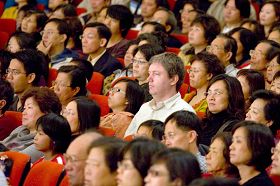 Audience packs the theater in Tainan 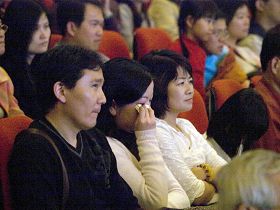 An employee at the Tainan Culture Center said that after seeing numerous shows, he feels that the Divine Performing Arts stands out from all others. It is truly a world-class show that he loves dearly. The show is so fabulous that he never tires of seeing it.

The following is some audience feedback from March 1, 2008.

Tainan County Clerk: It is a rare opportunity to see a show like this

Tainan County government clerk Ms. Liu Caidi said, "It is a rare opportunity to see a show like this. Although this is my first time to see this kind of show, I thought it was great. The songs are beautiful, both the music and lyrics are very good."

She continued, "I think the costumes are very classy, especially if you can get a close look at them. The dancers are so professional--not only their costume design and color, but every move is very elegant. I am really in awe of their dedication and talents. I love everything about them. They are truly remarkable. I guess it takes years of preparation to reach this level."

Board Member of the Weight Loss Association: The songs touched my heart

A lady in the beauty business is also a board member of the Weight Loss Association. She could hardly contain her excitement. "Both the men and women vocalists have very beautiful and powerful voices that are touching. I am a Christian so I could feel some of the inner meaning of the songs. When I study the Bible with other Christians, I feel that God is with us. I really can feel this. We believe that God is with us. Belief is powerful."

She also said, "What kind of message does the show bring us? Humans should be compassionate. Because God tells us to have compassion, the message has vital energy and should be passed on to future generations."

Spectator A: "I think the show is spectacular, especially the first program. It makes us feel like we are in a paradise, at least I felt that way. It seems that the entire audience is invited to the world of the Buddha and deities to watch a heavenly performance. My heart was deeply touched and I have many different emotions."

Spectator B: "The performances are very gentle and serene. They are inspirational, making our society and the world more peaceful and harmonious. The first program gave me the strongest impression; it was like a paradise of the Buddha and deities. Their world is very extraordinary. It appears that we are visiting their celebration. I came with my husband, friends and relatives, more than ten people total."

Spectator C: "I was touched by the songs. The singers' powerful voices felt like a tornado. The dances looked like works of art. I felt so fortunate to see the dances. It was just fantastic. I was also moved by the spiritual message in the lyrics."

Spectator D: "The show gave us a new perspective. Most of us know the principles, but we don't know how to express them. It touched our heart."

“Retired General: I Sensed the Power of Compassion”