On March 7, 2008, the Divine Performing Arts Chinese Spectacular was held for the second time in Vienna. During the intermission, two ladies from Austria expressed their appreciation of the show and how it helped them to better understand classical Chinese culture. Doctor of Chinese Medicine Mr. Yang, who sat beside them, also praised the show highly.

Dr. Yang said that he is from Beijing and has been living in Austria for 18 years. He told the reporter that he was moved to tears while watching the show yesterday, and he decided to come to see it again today. 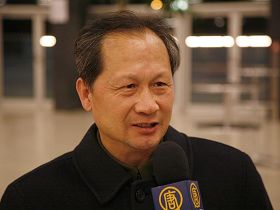 Dr. Yang said that he had brought more than ten patients to see the first show, and he wanted to see it again before it left town. "This show is excellent. It has presented our own divinely-inspired culture and helped us Chinese discover our roots and awaken our pride as Chinese people. It has tremendous educational value. It also helps us to appreciate the virtues of 'Truthfulness-Compassion-Forbearance' that Falun Gong teaches," he said.

Dr. Yang continued, "The shows in China simply do not match up to this one. This is exquisite, elegant art that inspires one's soul The show also talks about Falun Gong and what it is about, and I can tell that the performers have poured their heart and soul into it. As a fellow descendant of the Yellow Emperor and child of Chinese civilization, I feel immense pride after watching the show. Our society in China has lost much of its moral and ethical values, and this show represents a breakthrough in recovering our spirituality. It is a source of inspiration."

“Vienna Audience Member: "I Must Pay My Respects to These Artists" (Photo)”