(Clearwisdom.net)The US-based Divine Performing Arts Touring Company staged the premiere show of the Chinese Spectacular to a capacity crowd on the evening of February 26, 2008 at the Stadsschouwburg Theater in Antwerp, Belgium. At the end of the performance, the audience offered a long, standing applause. The performers answered the curtain calls three times, and the audience once again responded with overwhelming applause to express their appreciation for the performers. The Belgian Minister of Transport, Senior officials from the Department of Environment and Health, European Parliament members, Belgian MPs, and many artists were among the audience. 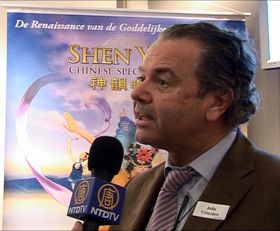 Member of the Flemish Parliament, Johan Vrancken from Hasselt, Belgium said that the show was very touching.

Mr. Allaert said, "European people have great interest in China, and want to learn more about China. For us, it's a good way to come see the Divine Performing Arts Chinese Spectacular and learn what is happening there."

Belgian MP Johan Vrancken is the owner of two hi-tech companies. He expressed appreciation for the diversity of the Chinese Spectacular. He thought the performance portraying the persecution of Falun Gong practitioners was very touching. 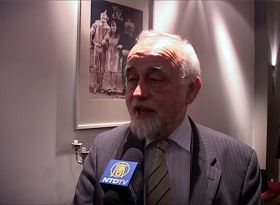 He commented after the show, "This was a completely different culture than we have seen before in movies, but now it's in reality. It creates a different kind of cohesion between the audience and the people on stage. What was very impressive for me was the performance from Tibet, 'White Lotus, Snowy Mountains,' and the performance depicting the people of Falun Gong who are in prison [The Risen Lotus Flower]." 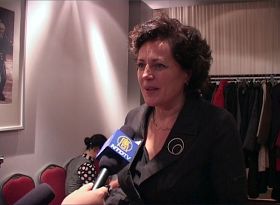 Mia De Schampelaere, a Federal Parliament member, and President of the 'Legal Commission' in the Federal Parliament loves music, so she attended the Chinese Spectacular by the Divine Performing Arts. She said, "It was marvelous! The message, about freedom, the freedom of thinking and the freedom of religion came across very clearly. The artistic level is very high. I think it's something you can usually not see in Europe, because we don't have the same elegance as the young Chinese people. The Chinese dancers are more 'light.'" 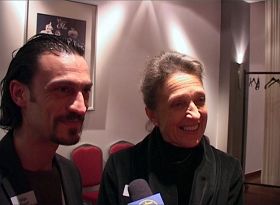 Marinella Paneda, the former head of the Royal Ballet School of Antwerp and his student are interviewed

Marinella Paneda, the former head of the Royal Ballet School of Antwerp, has trained many talented ballet dancers in contemporary times. She is an expert on Ballet. She said, "I think that art brings people closer, people and nations closer, and this is marvelous, this is a wonderful initiative."

Marinella Paneda said, " We feel extremely fortunate to see real Chinese culture. We read about China and its history, which is a huge history, so that naturally when we see this show, we can only think, 'They are making a very good start, they are trying to show who they really are,' and I think this is very important."

Marinella Paneda said, "I loved the drums... And when you feel this masculinity, this strength, I found that so marvelous, you can feel those drums beat into the depths of your soul, while in the girls you can see the femininity, the beauty, the grace in the movement, and I adored that too...well, we adored everything."

The Divine Performing Arts Touring Company will present two more performances at the Stadsschouwburg at 3:00 p.m. And 8:00 p.m. On February 27 before continuing to Paris on February 29.