(Clearwisdom.net) Many Chinese people went to the final show of the Chinese New Year Splendor in London on February 24.

Mr. Li and Ms. Lang are students from Changchun. Ms. Lang, a medical student, said: "The show is very touching. People don't have chance to see such a show in China. The colors are beautiful. Also, I never saw such beautiful background scene in China before. It was new to me. The contents were also good. It was pure, which is rare in China." Mr. Li said: "I was amazed. The show demonstrated the essence of our Chinese culture. I like the drum dance, which showed the power of Chinese culture."

Ms. Qi got his degree in London and now works for a company. She said: "I never saw such a show in China. It was really exciting that we can see it in London. It seems like the traditional Chinese dances are extinct in China nowadays." 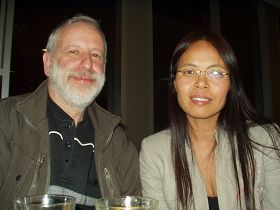 My Tang (right) and her friend Kevin Wright

My Tang, who is half-Chinese and half-English, is a social worker. She loved the costumes and music of the show. She said would bring her son to the show next year. She said she admires the young performers who grew up in Western countries but devote themselves to promoting traditional Chinese culture. She could see that the singers and dancers performed from their hearts.

Ms. Tang's friend, Kevin Wright, is a psychologist. He was impressed by the symbolism in the show, which conveyed very clear messages. He enjoyed the traditional dances as well as the messages of the dances that told a story.