On February 15, 2008, the Divine Performing Arts Chinese Spectacular presented its third show in Tokyo at the Bunkyo Civic Hall. President of the Taiwanese Association in Yokohama Luo Feng-chiang attended the show with deep interest. 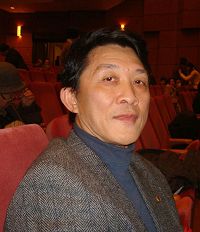 President of the Taiwanese Association in Yokohama, Luo Feng-chiang

The Taiwanese Association in Yokohama is based in the local Chinatown. Upon the arrival of the Chinese New Year and other major festivals in the city of Yokohama, the Association hosts a range of traditional Chinese cultural celebrations, such as the lion dance, dragon dance, and ethnic dances, and has thus made great contributions in the promotion of Chinese culture in Japan. For this reason, Mr. Luo is not a stranger to traditional cultural performances. Mr. Luo was full of praise for the Divine Performing Arts Chinese Spectacular.

He felt that the show communicated a message about cultural freedom. Mr. Luo said, "[The show] displays the virtue of freedom, with traditional Chinese history and characters from the ancient times, such as Yue Fei. The techniques of performance, along with the show content, were all very good."

Volunteer for Refugee Support in Japan, Ms. Xitian Sanzhizi said, "A Chinese friend invited me to this show. I feel very happy that I came. The skills of the actors were very profound, just perfect. The posture and dance movements of the female dancers, and the masculinity of the male dancers were well presented. "Lady of the Moon" is a story which people in Japan also know of, so we can further understand the deep meaning of this dance. I also liked the Erhu performance. If there is a CD from this musician, I would definitely buy it."

Zither (Chinese stringed instrument) professor Ms. Jingbi Heji attended the show with her husband. They said that the performances were very moving. Professor Jingbi has visited China on three occasions. Ten years ago, she attended a musical conference at Beijing University, and is very interested in Chinese culture. Her husband pointed out that a show of this kind renews the image of China. He said it was splendid. They asked to be notified of future shows by the Divine Performing Arts company.

“Theatergoer in The Hague: "Words Can't Express My Feelings" (Photo)”

“Professional Dancer in Tokyo Amazed by the Divine Performing Arts”