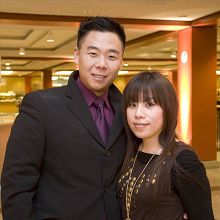 They said that they could understand the inner meaning that the show conveyed, "Life's meaning lies in searching for our origin." Mr. Seo said that he would tell his Chinese co-worker how wonderful the show is.

Mr. Seo's wife Thu Nguyen is Vietnamese and works in an advertising company. She said the performance was elegant, peaceful, and inspirational. 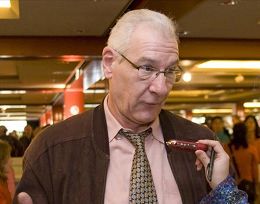 Mr. Heinz Scheidegger said he was deeply impressed by the dance "The Risen Lotus Flower"

Some audience members came from afar. Forty Swiss attendees rode a tour bus from a city 600 km away to Frankfurt to attend the Divine Performing Arts Chinese Spectacular. Markus Friker had seen all kinds of performances before. He said, "Remarkable--that's the only way I can describe the show! My favorite was the drum performance. It was phenomenal. The dances were of high caliber and very precise. No other show compares to this one."

Heinz Scheidegger said he was deeply impressed by the dance drama "The Risen Lotus Flower," and this performance left the deepest impression on him. He said he is a Christian, so he could fully understand the persecution of believers presented on the stage.

Ms. Verena Amstutz, who also came by the tour bus from Switzerland, expressed her excitement after seeing the show. She kept praising the dream-like beauty of the Divine Performing Arts Chinese Spectacular. She said that the round trip would take them 12 hours, but it was worthwhile, because the show struck a chord in her heart and soul. Before leaving, she asked the reporter to pass along her request for Divine Performing Arts perform in Switzerland.

Mr. Frank Neckermann and his mother came to see the show together. He thought all the performances were beautiful. He said that he would recommend the show to others, and if Divine Performing Arts came to Frankfurt again to perform, he would definitely attend.

Mr. Neckermann's mother, Karin Neckermann, praised the performance and singled out the bright and colorful costumes. She said that she appreciated Divine Performing Arts' presenting the subject of China's human rights persecution on stage.

Ms. Lilli Napieraski and her husband brought their parents to the show. Afterwards, she said to the reporter, "Wonderful, really wonderful!"

Ms. Napieraski added that her mother was mesmerized by the show. Her husband Michael Napierasi said that he knew nothing about Chinese culture before watching the show, and it was a treat for him to see it.

“Mr. Chen Jinshu from Hong Kong Sentenced to Six Years in Prison by the Bao'an District Court in Guangdong Province”