(Clearwisdom.net) The Divine Performing Arts touring company arrived in the Netherlands on February 19, 2008 and staged its premiere show at the famous World Forum Theater in The Hague. This was the third stop on their European tour, following performances in Duisburg and Frankfurt. 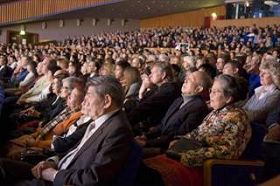 The Divine Performing Arts Touring Company is warmly received by the audience in The Hague, Netherlands on February 19, 2008

once again displayed mainstays of traditional Chinese culture such as respect for deities, the value of virtue, truthfulness, kindness and beauty to the enthusiastic and appreciative audience.

Many diplomats stationed in The Hague attended the show and highly praised Divine Performing Arts' performance. Walter Lion, Belgian Ambassador to the Netherlands, said that the performance was full of youthful vigor and he was deeply impressed. He said, "The choreography was very good, the costumes were really beautiful. The performance was a "Spectacular" worth recommending to others." 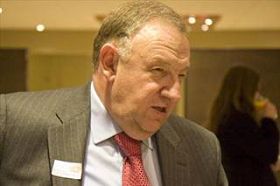 Ambassador Lion said he was pleased by the two Mongolian sequences, one evoking horsemen riding the plains called "Herding on the Mongolian Plains" and one called "Mongolian Bowl Dance." He also liked the Tang drum performance called "Drummers of the Tang Court." He said the music was so nice that he almost wanted to join their dancing. He thought it was very special that Chinese percussion instruments were used in the performance. He said he enjoyed the performance very much.

Nageeb Ahmed Obeid, Yemen Ambassador to the Netherlands, thought the performance was excellent. He said, "It was the first time for me to have seen such a performance. It's really hard to pick which dance was my favorite. The music and dances of the show presented Chinese history to me."

Vaidotas Verba, Lithuanian Ambassador to the Netherlands, thought the performance was "very unusual, very special." He particularly liked the first act "Descent of the Celestial Kings." He described the Chinese music in the show as being full of "power, melody and zest." He enjoyed the performance very much. 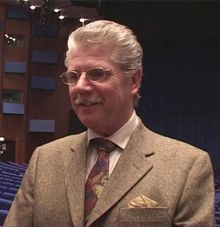 Ruud Van Didenhoven, manager of the World Forum Theater in The Hague, was deeply impressed by the Chinese Spectacular on Tuesday Feb. 19, 2008.

Ruud Van Didenhoven, manager of the World Forum Theater in The Hague, said the Divine Performing Arts Chinese Spectacular was impressive. He, too, was particularly impressed by the first act "Descent of the Celestial Kings." He remarked, "Amazing! The show was the perfect combination of modern technology and ancient culture."

During the intermission, the Spanish Ambassador said that the show was very good. He liked "the Mongolian Bowl Dance" and "Drummers of the Tang Court" the most.