Audience in Frankfurt, Germany: This Show Cannot Be Matched (Photo)

After the final show of the Divine Performing Arts in Frankfurt, Germany on February 17, 2008 the reporter met with three older ladies in the lobby of the theater. 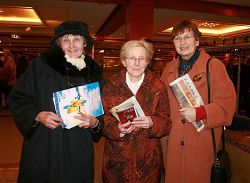 Ms. Bitter who was a nurse before retirement had apparently greatly enjoyed the show. She said with a gleaming smile, "Incredibly beautiful, marvelous. Each detail was unusual. The backdrop and each scene were incorporated so appropriately, and was dreamlike. Each dance was wonderful. The costumes were beautiful, too. Solo vocalists and dancers with ribbons were fabulous."

She continued, "It cannot be matched, it's absolutely unique. I have never seen something like it before. In one night, there was so much artistic enjoyment. Remarkable! Thank you very much. We will be very happy to come to see it again."

Ms. Bitter praised the show for speaking out against the oppression of the Chinese people by the Communist regime. "I was amazed and admire them. I thought it is very unusual, because it has an important educational meaning to everyone. The words displayed on the banner (Truthfulness-Compassion-Forbearance) can guide people to obtain a peaceful and happy life. That is what people should pursue. So, I want to say, 'Salute to the brave people who put all this into the performance.' It's wonderful. (Such a show) should be held more often."

Ms. Gestraud Jung heard about the show from Ms. Bitter one day before the show, and immediately decided to join her. She said, "I also thought it was very beautiful. Those dancers are also very beautiful."

Ms. Geiss is 80 years old. She mentioned that she had been worried before coming to the show that she could not bear sitting for a long period of time, and she was afraid that her legs would be stiff. But she still came, and was pleased to find that after sitting for such a long time, her legs did not bother her at all. She felt it was definitely due to the positive energy of the show.