The "Water Sleeves" dance in the Chinese New Year Splendor impressed He Tiankai, a retired Chinese engineer. He said, "The 'Water Sleeves' dance made it seem as if the performers were dancing in real water. The idea of this dance is very new and smart." 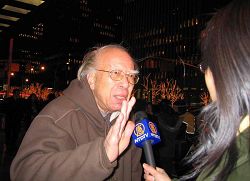 He Tiankai, a retired Chinese engineer

He Tiankai, who came to America 24 yeas ago, told the reporter that he liked the songs by Guan Guimin and Bai Xue very much. He was only sorry that they each performed only one song.

He Tiankai donated $1000 to the Global Chinese Vocal Competition last year, because he heard Guan Guimin, who was a judge of the competition, say, "I have been to Europe, Australia, and America, and I have noticed that overseas Chinese people don't help each other."

Mr. He finally emphasized that he thought the Communist Party would soon collapse.

“New Yorker: "This Is the Best Show I Have Ever Seen in My Life!" (Photos)”