New York Audience Member: "It's 5,000 Years of Culture Crammed into 3 hours, an Experience that Anybody Would Enjoy" (Photos)

Julia, who moved to the US from Russia three years ago, said, "It's nice to know more about Chinese culture, and to see Chinese folk dances."

"I don't know what's going on in China right now, so it was good to see the problems as they were depicted." She said she knew China was a communist country, but was not aware of the human rights violations, adding, "Communism never comes peacefully, it always creates shortcomings and disadvantages." She also said the show was thought provoking and sparked her interest in further studying the subject [of the persecution in China].

Kim Fuller, a journalist and managing partner for a Caribbean public relations corporation, said, "I love it! It's 5,000 years of culture crammed into 3 hours, an experience that anybody would enjoy. It sends a subtle message about the suppression that is taking place in China that the international community has to address." "The message is presented very tactfully, and is not offensive in any way, shape or form, and as nicely as it could have been." 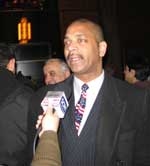 Kim Fuller, a journalist and managing partner for a Caribbean public relations corporation

Scarlett Dane from New York shared her thoughts with enthusiasm, "The show is so beautiful! What a treat to bring into the new year such a delightful, festive combination of colors and graceful dancing! My goodness, it's such a treat to hear the eastern and western instruments together. It's brilliant; it's beautiful! I'm very delighted to be here."

Vina Sami, a physician from New Jersey, is a first time attendee to the New Year Splendor, and she loved the backdrops, the Tibetan dance with long-sleeve dresses and the dance, "The Risen Lotus Flower," which depicts a Falun Gong practitioner achieving divinity after being beaten to death for her belief.

Sami's friend Rainu, a homemaker from New Jersey, said, "You learn a lot about the culture, because you see Chinese architecture and the mountains, the dresses." She particularly enjoyed the dance, "Fruits of Goodness," which depicts two boys who were redeemed and inspired by performing a kind act in a Buddhist temple.

A male Western audience member said, "I just experienced beautiful Chinese splendor. I loved the costumes; I loved the music. It took me on a trip, a dream that is special."

Calvin Cabrera from New York, who works for New York City Transit, read about the Splendor in a newspaper. He admired the intricacy of the programs, along with the beautiful choreography and costumes. He said it was a "spectacular show that exceeded my expectations."

“New York Audience: "The dancers are so graceful, it's unbelievable. Lovely!"”