I wish to send my Chinese New Year greetings to the Chinese communities as they celebrate their most important day of the year.

I applaud the leadership and achievement over the past five years of Divine Performing Arts to entertain and bring the splendor of ancient China to millions. The quality of these productions enriches all our lives and enable us to share in the cultural heritage of China.

My sincere thanks to all the members of Divine Performing Arts and I wish all continued success for many years to come. 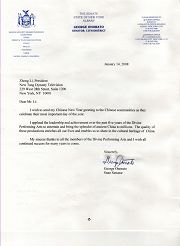