(Clearwisdom.net) The Organization of Security and Cooperation in Europe convened in Helsinki on December 4-5, 2008, with Heads and Ministers of Foreign Affairs from over 70 countries around the world in attendance. Finnish Falun Gong practitioners assembled along the roadside near the meeting venue and for two days, urged the participants of the conference to pay close attention to the nine-year brutal persecution of Falun Gong by the Chinese Communist Party (CCP). 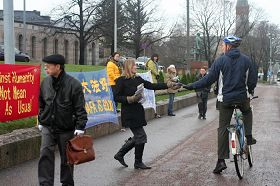 Please give me one of those papers 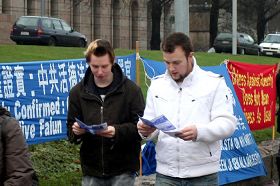 December 4th was overcast, and from the morning on there was wind, rain, snow and hail. Falun Gong practitioners held up banners reading "Falun Gong is good," "Stop the persecution of Falun Gong," "Condemn the organ harvesting from living Falun Gong practitioner," "Harming mankind is not just a common crime," more than ten banners in all, standing majestically unmoved by the inclement weather.

This was also the day of the plenary meeting of Finland's parliament. Some parliament members and pedestrians passed by the practitioners. They accepted the truth clarification flyers and held up their thumbs in approval at the practitioners' perseverance in the rain and snow.

One practitioner from Finland said that, since all of Europe's Ministers of Foreign Affairs have come, the practitioners would like to help them understand the true situation of the CCP's brutal persecution of Falun Gong so they might help stop it."

“Mr. Jin Junjie Dies as a Result of Persecution in Jilin Province (Photo)”