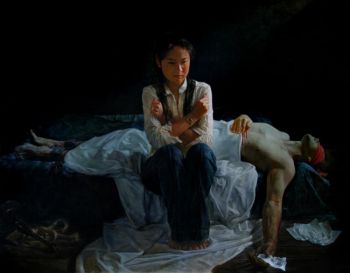 NEW YORK--Gold medal figure painting winner, Li Yuan said the inner meaning of modern art has been replaced by technique, and hopes a recent competition will herald a return to tradition.

"In my understanding, inner meaning and technique are one body in traditional culture."

He said the return to traditional oil painting methods is still at the difficult beginning stage and artists have been misguided by the decline of morality in society.

"If you look at albums of paintings by Chinese artists, you'll see big differences between contemporary paintings and the paintings done a decade ago. I don't even want to look at modern works, because they all reflect the outcome of that moral decline, such as sadness, loneliness, pornography, and even ghosts. The dark and depressing content has become heavier and heavier in the paintings--even in the works done by highly skilled artists."

Art education is the starting point for a return to tradition, Mr. Li said, allowing for a wider impact on society.

The NTDTV competition was focused on realistic oil paintings and attracted a great deal of interest from painters, regardless of their creative methods.

"The entire process of my creation is the process of understanding them. My participation in the competition is to verify whether I follow the right path and the reward has been a great confirmation for me."

The Design of Suffering in China

"Generally, a cross-shaped design is very hard to do, because it requires a strong balance with the character(s) in the middle. I chose it because I felt this design matched the theme of death."

To express tragedy, he chose to use contrasting colors, making the theme stand out. He said, "I used dim of light at the top corner to represent a ray of hope because the evil is eventually subdued by the righteousness in the universe. But I had to hide the light to emphasize the tragedy."

In order to get a clear impression of the story from his artwork, he painted a piece of red cloth on the victim's eyes. "Because I wanted to tell the story clearly--who was persecuted to death and who was the killer of the dead man. The color red has widely become recognized as associated with the Chinese Communist Party (CCP). This piece of red cloth symbolizes the CCP's evilness."

When he was nine years old Mr. Li started to learn the foundations of painting taught by his uncle, who was an oil painter. His first painting was "Water and Life", a study of a human hand with a jet of water splashing through the fingers.

"When I started to learn, my uncle made a sketchbook for me on which he wrote four Chinese letters with the meaning 'persistence.' This idea to carry on, no matter what happens, became my life motto."