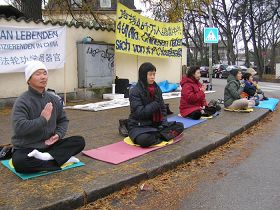 The CCP's persecution of Falun Gong has never stopped or paused since it began on July 20, 1999. The daily persecution cases posted on the Minghui/Clearwisdom website are merely a fraction of the actual cases, but looking at the information that has been exposed, it is nonetheless alarming. Take for example the titles of articles which expose the CCP's persecution that were published on the Minghui website on December 6, 2008. This provides a glimpse of the CCP's rampant persecution of Falun Gong practitioners:

A teacher who works in a vocational college passed by the Munich Chinese Embassy with his wife. They told the Falun Gong practitioners that they had taken some information the last time they passed by. After reading it carefully, they were shocked by the CCP's atrocities and couldn't believe that such things exist in the human world. Their children had learned about this matter as well. Their oldest daughter, who had just graduated from high school, and a few others said that they planned to bring the information to school to let more of their schoolmates know about this persecution. This couple signed the practitioners' petition and took many materials to give to other teachers and students in the college.