Malaysia: Calling for an End to the Persecution on International Human Rights Day (Photo)

On December 10, 2008, International Human Rights Day, Falun Gong practitioners held an appeal activity in front of the Chinese Embassy and delivered a letter to the Embassy, calling for the end to the persecution of Falun Gong in China. The persecution violates the United Nations Universal Declaration of Human Rights passed sixty years ago, which clearly stated that men and women of any age, without any limitations of race, nationality or religion, are entitled to basic rights, including life, freedom, security, speech, peaceful assembly and association. 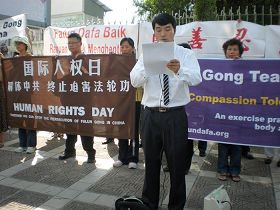 A representative of Falun Gong practitioners gives a speech

Local media reporters conducted interviews at the activity. Local police, including the Superintendent, Deputy Inspector and Assistant Inspector, inquired about the persecution of Falun Gong.

Falun Gong practitioner Mr. Zhang Zijian said that due to Falun Gong practitioners' persistent truth-clarification, many people have learned the true story and supported Falun Gong. Many western governments and politicians have asked the CCP to stop the persecution. The Coalition to Investigate the Persecution of Falun Gong gathered signatures from 131 countries calling for an end to the persecution before the Olympic Games. The signature campaign was supported by government officials, and people in law, business, medicine, and the arts. Mr. Zhang said that the CCP would eventually be punished. More and more people have seen clearly the nature of the CCP. Since the Nine Commentaries on the Communist Party was published four years ago, 46 million people have quit the CCP and its affiliated organizations. The CCP's days are numbered.