On November 30, Falun Gong practitioners travelled to Lyon, the second largest city in France, to promote Falun Gong and the principles of Truthfulness-Compassion-Forbearance, and to expose the Chinese Communist Party's (CCP) brutal persecution of Falun Gong in China. 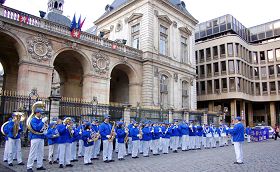 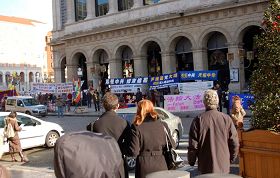 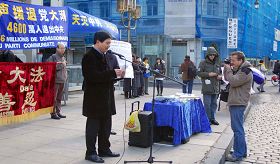 Tang Hanlong, the Chairman of the Falun Gong Association of France, making a speech 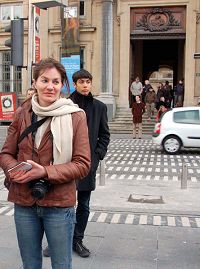 A young woman who showed support for Falun Gong 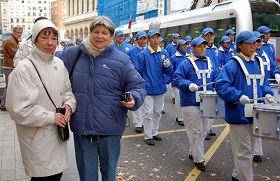 A Lyon resident who practices Yoga expresses her support

Lyon, located in the south of France, was to be the venue for the European Union (EU)-China Summit, scheduled for this December. However, the CCP has indefinitely postponed the summit in protest of the French President and other European leaders going to meet with the Dalai Lama in Poland. Despite the cancellation of the summit, Falun Gong practitioners still came to Lyon to clarify the truth.

Joining Falun Gong practitioners were other groups and human rights organizations, including the "Friends of the Central Plains" from Marseilles and the Association of Human Rights from Lyon.

The event was scheduled to start on Place de la Comedie, where the EU-China Summit was to have been held. As the European Divine Land Marching Band played several pieces of music including "Falun Gong is Good," a crowd slowly gathered.

Tang Hanlong, Chairman of the Falun Gong Association of France, gave a speech introducing Falun Gong. In his address he said, "Falun Gong is a way of cultivation based on Truthfulness, Compassion and Forbearance, according to which, cultivators can govern their actions and enhance their moral standard. The reason why we are here holding this assembly is that this group of innocent people is being brutally persecuted by the CCP in China. Falun Gong practitioners are being tortured and abused and even have their organs removed by the CCP. Falun Gong practitioners overseas are calling for people from all walks of life to help put an end to the brutal persecution of these kind people."The European Divine Land Marching Band then led a procession composed of Falun Gong practitioners and human rights groups. The procession travelled along the Rue de la RÃ©publique and arrived at the Place de la RÃ©publique, arriving at Place des Terreau where the government of Lyon is located.

Demonstrating the Falun Gong exercises near the Lyon City Hall 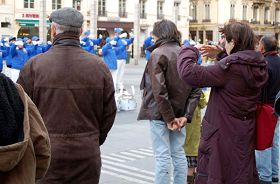 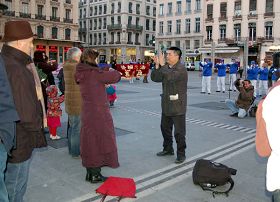 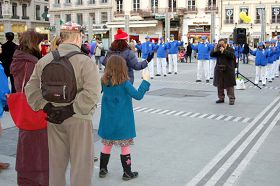 Falun Gong practitioners demonstrated the five sets of exercises while many onlookers followed along and some asked the practitioners to teach them the exercises.

While distributing truth-clarifying leaflets to passers-by, a young French woman said to a Falun Gong practitioner, "I am here specifically to support you." She said that she loves qigong and was very angry about the CCP's persecution of Falun Gong. When she read in the newspaper that Falun Gong would hold an activity, she decided to come here to offer her support.

Another Lyon resident who is a Yoga enthusiast came with her friends and said that what Falun Gong practitioners were doing was very good: "You should oppose the persecution and pursue freedom of belief."

On hearing a young Chinese practitioner tell her that Falun Gong is for cultivating Truthfulness. Compassion and Forbearance and is now being persecuted in China, a kind, older French woman was deeply moved. In the French custom, she kissed this practitioner and then said, "You have done a very good job. Keep doing it."