On December 7, the 36th Annual Mayor's Christmas Parade was held in Baltimore, with one hundred and thirty groups taking part. The mayor of Baltimore, Sheila Dixon, led the 3-hour, 2.5 mile long parade. 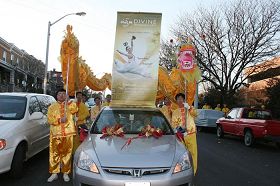 As the only Asian group, Falun Gong practitioners from Washington D.C. participated in the parade for the second time. Their entry consisted of a waist drum team, a float and dragon dance team. Practitioners set up display boards on their float to promote the Divine Performing Arts shows, which will be held from February 11 to 15 at Kennedy Opera House in Washington D.C.