(Clearwisdom.net) On November 3, 2008, practitioners of Falun Gong in Sydney gathered at Martin Place and held a press conference in the heart of Sydney's City Centre. They called on the Australian public and judicial departments to refuse to allow Zhou Yongkang into Australia because of his role as a prime perpetrator in the persecution of Falun Gong. 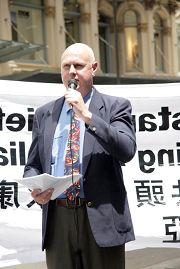 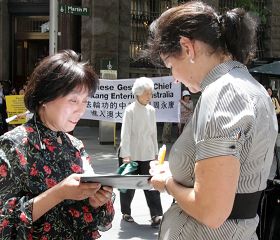 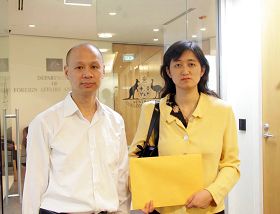 Representatives of the Falun Dafa Association, Ms. Zhao and Mr. Li, deliver a letter addressed to the Department of Foreign Affairs and Department of Immigration. The letter asked that human rights offender Zhou Yongkang be denied entrance into Australia.

Falun Gong practitioners rally outside the NSW Supreme Court in support of the lawsuit against Zhou Yongkang, a main perpetrator of the persecution in China.

Meanwhile, plaintiffs Chen Jingxiao, Li Jielin, and Liu Jinghang delivered documents in a lawsuit against former Minister of State Security, former member of the State Council, and former secretary of the Communist Party Committee of Sichuan Province Zhou Yongkang, for the persecution they suffered in China, including torture, for their belief in Falun Gong. The New South Wales Supreme Court accepted the documents.

The coordinator of the press conference was Michelle Engelsman. Michelle was on the Australian swimming team for the 2004 Athens Olympics. At the press conference, she told participating media and the public that Zhou Yongkang is one of the prime culprits in the persecution of Falun Gong, and has committed crimes against humanity and crimes of genocide. Michelle said that to invite such an offender of human rights to Australia sends the wrong message to the Chinese government. Moreover, it is not in line with Australia's values of respect and protection for human rights. She hopes that the Australian government will uphold the Australian ideals of freedom and democracy, and deny Zhou Yongkang entrance into Australia.

Mr. John Deller, spokesperson for the New South Wales Falun Dafa Association, said at the press conference that the Falun Dafa Association has delivered letters addressed to the Australian Department of Foreign Affairs and Department of Immigration, to request the denial of Zhou's entrance into Australia. He believes that the ministers were not fully acquainted with Zhou Yongkang's deeds and actions in China. Mr. Deller said that Zhou Yongkang has been one of the masterminds behind the persecution of Falun Gong in China, thus denying his entrance is for the benefit of Australia. If such a character gained entry into Australia, there would be "a significant risk that he would vilify a segment of the Australian community (Falun Dafa practitioners) or incite discord therein."

The WOIPFG spokesperson expressed that the Australian people hold high regard for freedom of religion and human rights, and would not welcome Zhou Yongkang, whose hands are stained with the blood of Falun Gong practitioners.

Ms. Chen Jingxiao, one of the plaintiffs in the lawsuit against Zhou, also exposed the brutal persecution she personally experienced before escaping from China. Ms. Chen was sentenced to two years in a labor camp, during which time she suffered countless threats, coercions, maltreatment and beatings with electric batons. Furthermore, her computer, worth up to ten thousand yuan was confiscated, and her family members could not obtain any information on her situation for lengthy periods of time. The deeds committed by the Chinese Communist Party (CCP) have caused tremendous pain both physically and mentally to its victims. Ms. Chen's sister was also illegally sentenced to forced labor for three years.

Another plaintiff, Li Jielin, said that when the CCP launched its full scale persecution of Falun Gong on July 20, 1999, former Party Secretary in Sichuan Province Zhou Yongkang closely followed Jiang Zemin, and implemented his brutal policies against Falun Gong practitioners in Sichuan. Li Jielin said, "On July 13, 2000, at approximately 7:00 p.m., I was arrested and taken to a detention center. That night, I was forced to participate in forced labor. On that day, I began to live a life in conditions unfit for human beings. On April 13, 2001, they transferred me to a women's prison. In the "Eighth Group Under Surveillance," I was constantly monitored by criminals, on orders from police officers. Around the clock they followed me, during meals, when I went to the bathroom, and even when I was in forced labor. They adopted the 'exhaustion tactic' attempting to brainwash me. Each day, I was forced to repeat labor chores, and often forced to stand for long periods of time. I was severely stressed both in mind and body. Only because of my belief in Falun Gong, I was forced to spend three long years imprisoned. My daughter Wang Wei, and son in law Wu Hongbo, were also illegally imprisoned for practicing Falun Gong. Shortly after Wang Wei suffered two years in a forced labor camp, she was again detained for three months, enduring brutal brainwashing."

Former associate professor in the Chinese Academy of Science, Ms. Liu Jinghang was also a plaintiff in the lawsuit against Zhou Yongkang. During an interview, Ms. Liu spoke of her personal experiences as a Falun Gong practitioner under the persecution in China. Due to her belief in Falun Gong, she was illegally sentenced to three years of imprisonment under false charges. Meanwhile, in its attempt to "eradicate" Falun Gong practitioners, the CCP sought to "financially bankrupt," and deprive Falun Gong practitioners of their rights to live. As a former scientist in high-level academics, Ms. Liu was also stripped of her full retirement fund.

After the press conference, representatives from the Falun Dafa Association, Ms. Zhao and Mr. Li went to the Sydney office of the Australian Department of Foreign Affairs and Trading (DFAT) to deliver a letter addressed to the ministers, requesting the denial of Zhou's entry into Australia. According to Ms. Zhao, staff members from DFAT received the representatives of Falun Gong practitioners, and promised to pass on the letter to the Minister of Foreign Affairs as soon as possible.

Ms. Zhao said that Falun Gong practitioners were not against the trade and political relations between Australia and China. She said the letter was delivered in hopes that the Australian government can gain a clearer understanding of the crimes against humanity and crimes of genocide committed by Zhou Yongkang and other high-level Chinese Communist officials, who are the main perpetrators and masterminds behind the persecution of Falun Gong. To extend invitations to such offenders of human rights for visits to Australia constitutes a humiliation to Australia. Additionally, the letter informed the minister that a number of Falun Gong practitioners who had suffered direct persecution in China are in the process of suing Zhou Yongkang and his accomplices in crime. They hope the Australian government can uphold respect for judicial independence, and support Falun Gong practitioners in seeking justice in free countries.

On November 5, practitioners of Falun Gong from various parts of Australia gathered in Canberra to appeal to DFAT and the Australian Attorney General's office. They requested that the Australian government assist plaintiffs in the lawsuit against perpetrators of the persecution in serving legal documents to the defendant.

According to an investigative report from WOIPFG,

In December 2002, as soon as Zhou became the Minister of Public Security, he spoke at a meeting with bureau-level, and upper level cadres in the Public Security Bureau, and at a nation-wide video-telephone conference attended by all public security departments, and called for an escalation of the persecution of Falun Gong.

Between 1999 and December 2002, when Zhou Yongkang was the secretary of the Communist Party Committee of Sichuan Province, he pushed the whole province to increase the intensity of the "transformation"of Falun Gong practitioners.

Zhou is a suspect in fabricating false news that defamed Falun Gong, and blocking the distribution of Falun Gong truth-clarifying information. As Minister of Public Security, Zhou also rewarded the people and departments who actively participated in the persecution of Falun Gong.