Sweden: More and More People Find Out about the Persecution of Falun Gong (Photos) 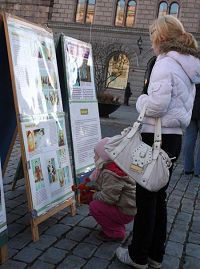 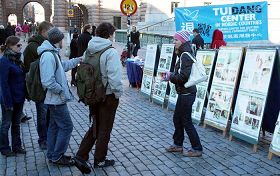 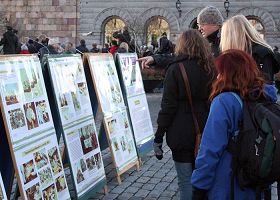 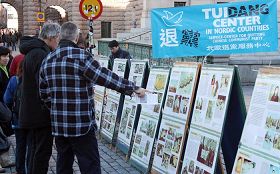 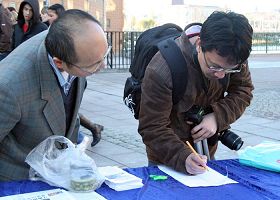 People sign their names to condemn the CCP for persecuting Falun Gong.

After the posters were set up, tourists from different parts of the world soon stopped to look at them. They also asked many questions about the persecution of Falun Gong in China.

A man called Ham, who came from Malaysia and is an engineer, stood in front of the display boards and did not leave for a long time. He said that he felt very gratified after seeing so many Chinese people waking up and quitting the Communist Party,. He asked practitioners to take a photo with him next to the banners and display boards, as a keepsake, and signed his name to condemn the CCP's persecution of Falun Gong.

One Swedish local had already learned about the persecution of Falun Gong. He often passed by this area and every time he saw Falun Gong practitioners holding an activity, he would greet the practitioners and encourage them.

Miss Hannatan works in a restaurant in Stockholm, and she had been to China and to Tibet. The atmosphere of terror there is still fresh in her memory to this day. She said, "It really is like what the Western newspapers have reported; the rule by the CCP is really terrifying." She kindly advised practitioners to pay attention to safety. She said that she believed the news of the CCP harvesting Falun Gong practitioners' organs, because she believed that the CCP would do anything for its own gain. She signed her name at the petition table condemning the CCP persecution of Falun Gong and asked for a Chinese newspaper and some truth clarification materials, which she planned to give to a Chinese friend.

On that day there were also a few Chinese people who passed by the Falun Gong booth. Practitioners talked to them and gave them materials with detailed information so that they could know more about Falun Gong and the CCP's persecution.