Ms. He Xianggu Calls For Outside Help After Being Forcibly Injected With Nerve-Damaging Drugs in Mental Hospital (Photo and Sound Recording)

This sound recording, which made it out of China after passing through many hands, is about Ms. He Xianggu, a Falun Gong practitioner in Changsha City, Hunan Province. Ms. He was a nurse in the outpatient operating room of the Maternity and Children's Health Care Hospital in Hunan Province. She has been illegally detained in Hunan Brain Hospital (also called the Second People's Hospital, originally known as the Hunan Mental Hospital) for more than three months. Hospital officials have forcibly injected Ms. He with nerve-damaging drugs since October 10, 2008. 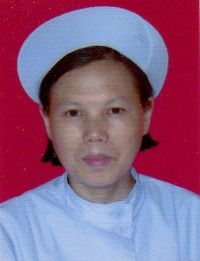 (A photo of Ms. He Xianggu, a Falun Gong practitioner in Changsha City)

Ms. He wanted to make this sound recording to expose the crimes of the 610 Office in Hunan Province and the Chinese Communist Party (CCP) officials in the Maternity and Children's Health Care Hospital to the international community. Since July 20, 1999, the Chinese Communist authorities have forcibly sent thousands of Falun Gong practitioners to mental hospitals and injected them with drugs that damage their central nerve systems. The mental health hospital system has become a tool that the CCP uses to persecute and torture Falun Gong practitioners. We call for help to support Ms. He and other illegally-detained Falun Gong practitioners in mental hospitals, and we hope that everyone can help to put an end to this persecution of innocent people.

My name is He Xianggu, and I am a Falun Gong practitioner. I worked as a nurse in the outpatient operating room of the Maternity and Children's Health Care Hospital in Hunan Province. On April 23, 2008, the police at the WuJialing Precinct illegally detained me in the detention center after they arrested me. After I went on a hunger strike for 17 days, the police sent me to a forced labor camp in Baimalong for two years.

At that time, the Baimalong Labor Camp didn't want to take me in because I had coronary heart disease. However, after several discussions with the 610 Office staff and my hospital, they finally agreed to accept me. After I went on a hunger strike for two months, I was released on medical parole. However, my hospital and the 610 Office staff transferred me to the Hunan Brain Hospital (the Second People's Hospital).

After they sent me to Hunan Brain Hospital, I ended my hunger strike and asked for my release. Three months later, Luo Zhaoping, the head of the psychiatric division in the hospital, applied for my hospital to discharge me and asked them to come to take me back. However, my hospital refused.

Luo then consulted with the president of the hospital and decided to treat me as a mentally ill patient. Four to five people held me down on a bed and forcibly injected me with an imported drug called Risperidone. They told me it cost 1,000 yuan per shot, and it was used for treating "witchcraft mental illness." When I asked Luo for the name of the drug, he didn't want to tell me. I also asked Chen Zizhen, the chief doctor, but she refused also. She asked, "Why should I tell you anything? We have to obey orders from above, otherwise Mr. Luo and I will be fired."

Many patients in the hospital were upset when they saw how the doctors treated me. The nurses told me that they didn't want to treat me that way, but they had no other choice. Seeing that they behaved like a gang of irrational thugs, I decided to go on a hunger strike. In response, they hooked me to a tube and force-fed me.

I am exposing this so that people outside can understand what is happening and help me.

To the Directors and Secretaries of Maternity and Children's Health Care Hospital in Hunan and Hunan Brain Hospital, and the Head of the Psychiatric Division Mr. Luo:

I, He Xianggu, am putting what is in my heart down into words, and I hope you will weigh the pros and cons of your actions.

I was released on medical parole to my second oldest brother He Guirong. However, the 610 Office and my hospital didn't want my family to take me home. They deceived them by saying that they would help treat my illness in Changsha City, and would arrange work for me after they healed me. In reality, they sent me to the Hunan Brain Hospital, where I was forcibly detained. Despite how I was treated, I don't hate them. As a Falun Gong practitioner, no matter what happens to me, I will never forget the teachings of my Master: Truthfulness-Compassion-Forbearance.

I would like to thank Mr. Luo, the head of the psychiatric division in Hunan Brain Hospital, for not treating me as a mentally-ill patient. Hu Hui, the director of the hospital, and my colleagues came to see me. I thank them. I hoped that they would understand why I went on a hunger strike to protest my unfair treatment. Falun Gong practitioners are kind and good citizens. I am innocent, and I think everyone can rationally distinguish what is good and evil, right and wrong.

Mr. Luo promised to discharge me after the Paralympic Games, but he didn't. He later told me that he would release me after the 11th Meeting of the National People's Congress. I believed him, even though I saw that he wasn't telling me the whole truth. I was very patient with him, and I didn't want to blame him for causing the delay. One time, I couldn't hold it in anymore, and my tears streamed down. When he saw me, he patted me on my shoulder and walked away reluctantly.

I have been illegally detained in Hunan Brain Hospital for over three months, and the promise for discharging me has not been fulfilled. I have been held down on a bed by four to five people, who forcibly injected me with a so-called "Witchcraft Mental Illness" anti-psychotic drug, since October 10, 2008.

Because of my persistence in practicing Falun Gong, I was arrested and detained in Hunan Brain Hospital in 2000. They forcibly injected me with a brain-damaging drug, causing me great physical and mental pain. Eight years have passed, and this inhumane act happened again. Amidst the moral degeneration of today's society, Falun Gong practitioners have upheld the principles of Truthfulness-Compassion-Forbearance. I believe this is our hope for upgrading people's morality. Hurting and killing people who believe in Truthfulness-Compassion-Forbearance is destroying the remaining moral conscience that people still have. In the face of such evil, I won't pretend not to hear or obey it blindly. But as a Falun Gong practitioner, I will not resort to any violence: from the first day that I was forcibly injected, I decided to go on a hunger strike until I am freed.

Although I have gone through this painful experience, I have never blamed anyone for it. However, I know that no one can escape from the heavenly principle of karmic retribution, and the perpetrators will be held accountable. For the sake of your future, stop committing sins and repent for your crimes.

I am not a criminal, and believing in Truthfulness-Compassion-Forbearance is not wrong. No one has the right to deprive others' freedom of belief. I demand my immediate, unconditional release. Since I am still employed at the Maternity and Children's Health Care Hospital of Hunan, I want to resume working, as well.

“My Cultivation Experience Over the Last Year”