Note: The following is an abbreviated version of a longer and more detailed article that appeared on the Minghui.org website (Chinese version of Clearwisdom.net).

Baoding City, Hebei Province, is close to Beijing. The two cities are about 130 km (approximately 81 miles) apart. The northern part of Zhuozhou City and Laishui County are part of Beijing's Fangshan District. The three areas are under the jurisdiction of Baoding. There are 18 counties and four county-level cities. The total area is 22,000 square kilometers and its population in 2004 was 10,890,000.

According to a report on the Minghui (Chinese version of Clearwisdom) website, from April 1 to August 8, just before the beginning of the Beijing Olympic Games, three practitioners were tortured to death, 362 people were illegally arrested, and 25 escaped during the arrest attempt. There were 402 episodes of homes ransacked, 80 people were severely harassed, 67 were detained, and 10 were tried illegally.

The map below shows the number of practitioners illegally arrested, the number of homes ransacked, and the number of those detained in Baoding counties and cities. (Click on map for larger image) 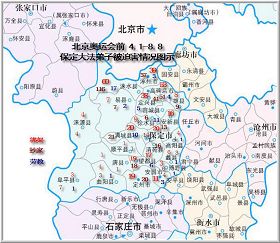