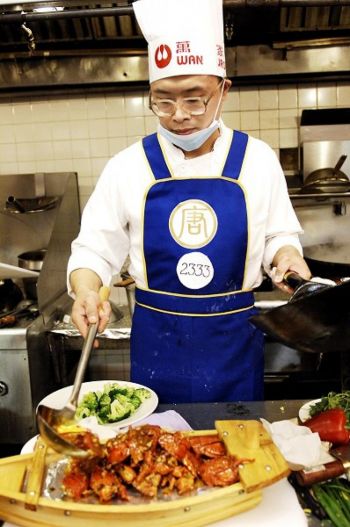 NEW YORK--Dish after dish, round after round, dozens of Chinese chefs tirelessly cooked up exotic Chinese delicacies, showing off their technical skills and superb creativity. But after the judging committee had made up its mind, only one chef stood out, winning the Gold prize in the Shandong cuisine division: Chen Yongming, a Chinese-American from Flushing, Queens, whose final round dish was the colorful "Red Lotus." Because the competition had five different cuisine subcategories which participants could only join one of, judges were allowed to award Gold, Silver, and Bronze prizes in each category but eventually only one Gold prize was awarded: to Chen.

Chen was one of the 38 chefs awarded in the culinary competition, which NTDTV said was to "promote authentic Chinese culinary techniques, revive traditional Chinese culinary methods, as well as carry forward the exquisite culinary culture of China and disseminate orthodox Chinese culinary philosophy." The awards ceremony was held Wednesday night at the Peking Hunan Park Restaurant at 100 Park Ave. in Manhattan, where the preliminary and final rounds of the competition were held on Monday and Tuesday. After the awards ceremony, NTDTV hosted an extravagant banquet where guests were treated to such Chinese classics as Sautéed Shrimps with Rainbow Julienne Vegetables and Spiced Mock Duck.

Chen, however, couldn't make it to the awards ceremony and arrived at the Peking Hunan Park just as the banquet was winding down. Because his cooking was so popular at the restaurant where he worked, he was - ironically - busy cooking at a party hosted by his boss's wife. "She really loves my beef with black pepper steak," he said after showing up late.

Stepping into the spotlight, Chen spoke of his many influences. "I'd like to thank my parents, all my teachers, my wonderful wife, and NTDTV for hosting this competition," he announced. "And I'd also like to thank all of those who love Chinese food."

NTDTV's International Chinese Culinary Competition is divided into five subcategories, each a different type of Chinese cuisine. Each of the separate cuisines has its own unique style and presentation: for example, Szechuan cuisine is known for being very spicy, while Cantonese cuisine is known for its utilization of fresh produce and seafood. Northeastern cuisine emphasizes richness, while Huaiyang cuisine (originating in Jiangsu province) emphasizes fine cutting and mild tastes. Shandong cuisine, which is Chen's forte and the category in which he won his Gold prize, was the designated cuisine for palaces in the Yuan, Ming, and Qing dynasties.

Qu Yunqiang, head of the judging committee, lauded the competition as a "success." Discussing the judging guidelines and what the judges were looking for, he said that each dish has its own uniqueness and individuality, and that it was up to the chef to bring that out in the dish.

"A great dish requires that the chef can fully express its idiosyncrasies," he said. "The most important aspect of a dish has to be its taste. If it doesn't taste right, even if it looks good, it won't win."

Great taste is one of the most important features of Chinese cuisine, and the taste of a specific dish often has historical roots that it must live to. Judges also critiqued each contestant's technique, which is an essential part of Chinese culinary arts, and his/her sanitation. An excellence in all of those, Qu said, was why Chen won the Gold prize. "His technique - especially his knife technique - was outstanding," he said. "And the taste was spot-on."

Jia Yachuan, a Chinese-American who is also from Flushing, Queens, won an Honorable Mention for his dish "Fortune Meat." After cooking a large chunk of meat, Jia created the Chinese character for fortune - "fu" on a thin slice of egg, and placed it on the meat - hence the name. But the name of the dish also points to a slice of Chinese culture: those who were able to eat the fat and skin on a piece of meat were said to have fortune, or "fu." This is in stark contrast to Westerners and specifically Americans, who are very fat-conscious and tend to avoid fat on meat whenever possible.

Despite his award, Jia expressed his disappointment in not being able to place higher. "I didn't cook well, it's as simple as that," he said. "In fact, I don't think anyone in the Northeastern division cooked well. No one received a Gold prize."

No chef grabbed the top prize, which comes with $10,000, in the Northeastern division. While no winner emerged from that category, Qu saw differently. "To me, all contestants are top chefs," he said, "because they are all committed to promoting authentic Chinese culture and cuisine."

In a city saturated by fast-food Chinese restaurants whose dishes are not the most authentic, NTDTV's International Chinese Culinary Competition acts as a beacon for authentic Chinese cuisine and the beauty of Chinese culinary arts. Bringing together distinguished chefs and household cooks alike from as far away as Taiwan, California, and Hong Kong, NTDTV's Chinese Culinary Competition represented the best of the best of not just Chinese cuisine and culinary arts, but also Chinese culture as a whole.

And that's why, after accepting his Gold prize award, Chen Yongming ended his acceptance speech with what every Chinese cuisine lover was thinking that night: "I genuinely hope that Chinese food becomes more and more popular around the world."

“Attaining the Righteous Enlightenment of Selflessness and Altruism”