Every year on November 11 the Veteran's Day Parade makes its way down famous Fifth Avenue in Manhattan, New York City. Since 2005, the Falun Gong procession has been one of the shining stars of the parade. This year, 153 groups participated in the parade, and the group assigned to the last position--the grand finale of the parade--was Falun Gong with its waist drum section, exercise demonstration, and dance team. Falun Gong's procession was again warmly applauded by New Yorkers. 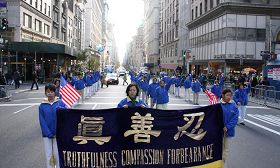 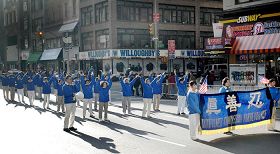 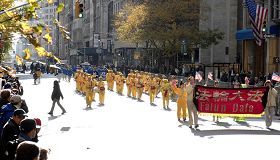 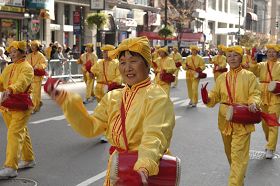 While the practitioners were waiting at the assembly area, a Chinese lady walked by and waved to them in encouragement. A few Chinese looked on and took photos.

Marching down the parade route, Falun Gong practitioners received enthusiastic responses from New Yorkers. Just like the older lady waiting for the practitioners' procession said, many people were waiting for Falun Gong. People took photos and videos and watched the exercise demonstration closely. Some waved at practitioners and others followed along with the exercise movements. Some spectators received the truth-clarification flyers and asked questions about Falun Gong. As the parade passed by the famous St. Patrick's church, two priests on the sidewalk waved to practitioners and then applauded warmly.

When the Falun Gong contingent arrived at the main platform, the host announced, "We welcome you, Falun Dafa. We welcome you here." When the parade ended, one high school student was asking his friends, "What is Falun Dafa?" His pronunciation was quite accurate.

Since the parade was held on a Tuesday, a work day, most of the parading practitioners were older ladies and a few young practitioners who were students. But the practitioners looked so energetic that one Chinese spectator told his friends that he saw "many young people practicing Falun Gong."

The two Western practitioners holding the lead banner were also very pleased. John said it was great to have thousands of people watching Falun Gong in the parade. Irina said that many spectators were watching attentively and many waved their hands and applauded.

“We Must Be Considerate of the People We Are Saving”